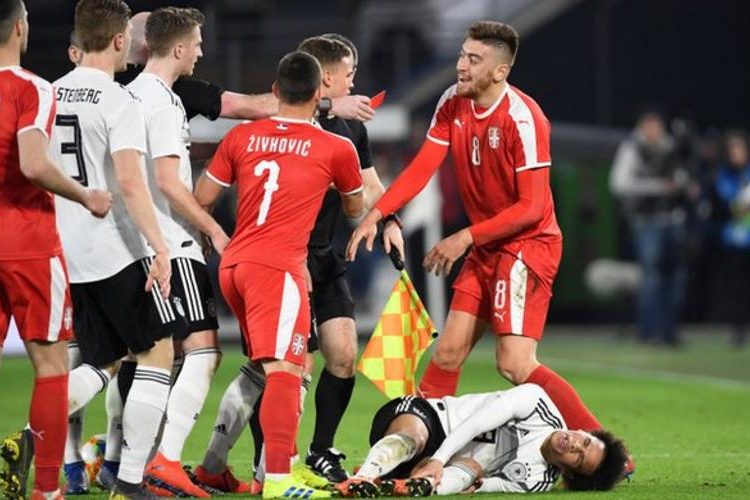 Pavkov was sent off in the 93rd minute for his challenge on Sane (Image credit: Reuters)

Germany head coach Joachim Low said Leroy Sane was “lucky” after a “vicious foul” on the Manchester City forward led to Serbia’s Milan Pavkov being sent off as the sides drew 1-1.

Sane hobbled from the pitch after the foul in added time at the end of the friendly.

“It was a vicious foul,” said Low. “Sane was lucky and got away with not getting hurt but such fouls can break bones.”

Low’s youthful side went behind to Luka Jovic’s header in the 12th minute, before substitute Leon Goretzka hit the equaliser after the break.

Germany dominated the early possession but Jovic was on hand to turn in the loose ball from six yards before Goretzka levelled with a fierce strike in the second half.

Serbia were reduced to 10 men late in injury time after Milan Pavkov was shown a straight red for a reckless late foul on Manchester City’s Leroy Sane.

The 2014 world champions begin their Euro 2020 qualifying campaign against the Netherlands in Amsterdam on Sunday, 24 March, while Serbia travel to Portugal on Monday.

Cause for optimism in Germany’s new era

Low made the surprise decision earlier this month to change the direction of the German national side by favouring youth over experience.

Bayern Munich trio Mats Hummels, Jerome Boateng and Thomas Muller have been told they are no longer required, while Manuel Neuer was the only World Cup winner to start against Serbia.

Germany retained possession well in Wolfsburg, although they struggled to carve out many chances in a disappointing first half.

Their defensive frailties were exposed at the other end when they failed to clear their lines from the visitors’ first corner, as the lively Jovic reacted quickest to convert from close range.

Serbia could have been further ahead had they been more clinical in front of goal but a last ditch tackle from Lukas Klostermann prevented Jovic from doubling his tally.

However, Borussia Dortmund forward Marco Reus was introduced off the bench and Germany began to exploit the Serbian defence which had looked so solid for 45 minutes.

Leroy Sane began to pick up the ball in space as Reus’ influence grew on the game, and Goretzka struck the equaliser with a fierce effort as Low’s young side chased what proved to be an elusive winner.

Germany’s young charges may not challenge for major international honours in the immediate future but in the likes of Reus and Ilkay Gundogan, Low has enough role models to develop his freshling squad.

The Germany boss was happy with his young side. He said: “In the first half the automation in this new team, playing together for the first time, did not function that well.

“In the second half the team sent a very good signal that we can increase pressure and we can increase the tempo. We had a lot of chances and we missed the final touch a bit. That is also part of the learning experience.

“Overall, I am very satisfied with the mentality, the pressure we created.”

Final field for Egypt 2019 Settles This Weekend On DStv Now