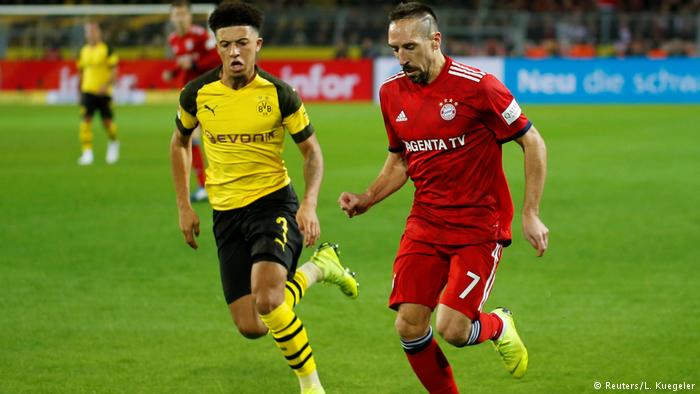 They have won the past nine Bundesliga titles between them.

German champions Bayern Munich host Borussia Dortmund on Saturday (kick-off 16:30 GMT with live text coverage on BBC Sport) – a match described as the “biggest game of the season in Europe”.

And for once, Bayern, managed by Niko Kovac, are the ones chasing Lucien Favre’s Dortmund, who lead the way by just two points with seven games remaining.

At the start of December, the title race looked to be over with Dortmund nine points clear at the top, but Bayern took advantage of the stuttering form of their rivals to claw back the deficit.

However, Bayern slipped up last week by drawing against Freiburg and the yellow and blacks beat Wolfsburg with two late Paco Alcacer goals to regain the initiative.

Both teams were knocked out at the last-16 stage of the Champions League by English clubs, Bayern losing against Liverpool and Dortmund suffering defeat at the hands of Tottenham.

Balague said: “Kovac has found a way of playing now that makes them solid. When they start scoring, they don’t stop scoring. Plus, they have the momentum with them.

“In terms of this weekend, Dortmund don’t usually get anything when they go to the Allianz. It all seems stacked in Bayern’s favour.”

Smith said: “Dortmund raced into this lead and had this incredible start to the season. Jadon Sancho was setting up goals, Alcacer was coming on with 15 minutes to go and scoring hat-tricks, Marco Reus was back and looking brilliant and then, around March, the time when they played Spurs, they just stopped.

“They ran out of energy, they ran out of ideas. It seemed like they choked, for want of a better word. Suddenly you had this big red machine, trundling up behind them.

“Niko Kovac found a style that worked for him and you thought ‘relentlessly, remorselessly, Bayern will catch Dortmund’. But Dortmund have suddenly found a way back.

“It is probably the biggest game of the season, in Europe, in terms of what rests on it in any of the major five leagues. The timing of it, the gap between them, it is a proper title decider.

“Dortmund have this big game at the Allianz, where they don’t need to win, they just need to draw to keep their two-point lead.”

Beware the fox in the box

Bayern striker Robert Lewandowski leads the scoring chart this season and is just one strike away from registering 200 goals in the top flight but Dortmund’s Spanish striker Alcacer is just three adrift for this term and has scored at a quicker rate.

Balague said: “Alcacer is not a very good player, but he is a great striker. He finishes moves.

“He is not the fastest for the kind of counter-attacking moves they practise; physically you can’t ask him to do 90 minutes of pressing football, but he has the knack of scoring goals at the right time, even from the bench.

“But his all-round game is not one you can trust. He loses the ball and doesn’t get involved outside the box, but in it he is great.”

Bayern are aiming for a league and German Cup double, after progressing to the semi-finals of the competition by scraping past second-division side Heidenheim.

The 28-time champions are on a run of six consecutive Bundesliga titles, but are already looking to the future by building for next season.

They have agreed a club record £68m deal to sign defender Lucas Hernandez from Atletico Madrid, as well as France international team-mate Benjamin Pavard from Stuttgart for a reported £31m.

Smith said: “This isn’t a vintage Bayern team – the one that has beaten Dortmund four times in four years at the Allianz.

“In times past, if Lewandowski didn’t fire, Thomas Muller, Arjen Robben or Franck Ribery would but everyone looks a little less than they were.

“It is the end of an era for Bayern and if there is a time for Dortmund to catch them, it is now.”