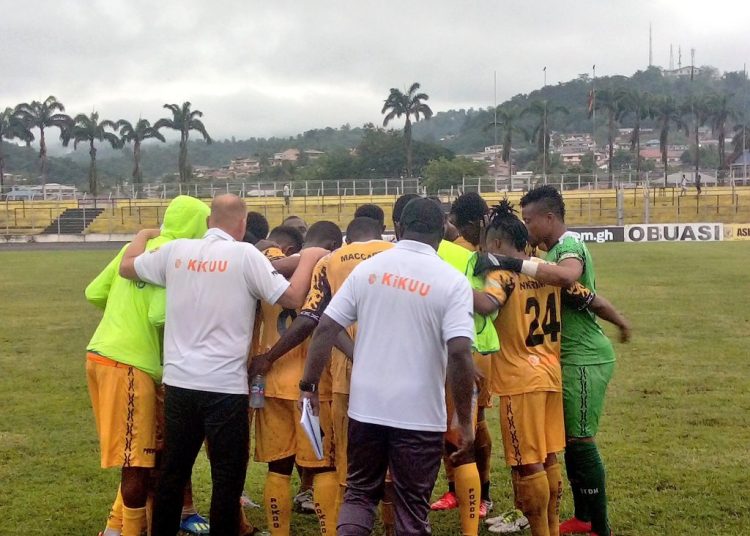 It was a day for Shafiu Mumuni as his goals powered AshGold to a 4-1 win over Aduana Stars at the Len Clay Stadium.

Mumuni grabbed a hat-trick in the 4th, 28th, 42nd minutes and even scored own goal in Aduana Stars’ favour in the 21st minute. On 84 minutes, Amos Nkrumah added the fourth for AshGold whose head coach, Kjetil Zachariassen, had demanded 100 percent performances from his players after they beat Kotoko 1-0 in Week 11.

Hearts of Oak kept their winning run going with a 1-0 victory over Karela United at the Accra Sports Stadium. The exciting tie was settled by a Christopher Bonney penalty in the 74th minute after Daniel Kordie was fouled in the area.

The same score was produced at the Baba Yara Stadium when Kotoko hosted Techiman Eleven Wonders. Abdul Ganiu scored the only goal from the penalty spot.

The round also produced some very good away wins for Liberty Professionals, Bechem United and Elmina Sharks.

Liberty found a 2-0 result at Inter Allies with the goals coming from George Ansong and Francis Owusu while Kojo Owusu, Charles Mensah and Hope Ayayevu were the scorers for Bechem United at Berekum Chelse Berekum Chelsea a in a 3-1 victory. Francis Twene found the consolation for the home side.

Elmina Sharks beat WAFA 1-0 in Sogakope thanks to a goal from George Amonoo.

On Thursday, Dreams FC beat Ebusua Dwarfs 2-1 in their rescheduled encounter. The game was suspended in the 50th minute on Wednesday due to rain with Dreams FC leading 1-0 through Samuel Larbi Borquaye.

Ghana is the highest exporter of footballers in Africa - Report