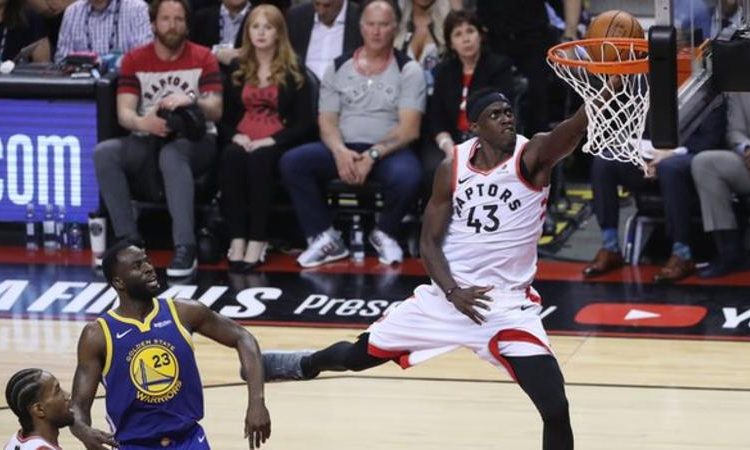 The Toronto Raptors defeated reigning champions the Golden State Warriors 118-109 in the opening game of the NBA Finals.

Pascal Siakam, 25, top scored with 32 points for the Raptors – who are in the finals for the first time in their history – while Kawhi Leonard added 23.

Stephen Curry scored 34 points for the visitors, who are attempting to win three championships in a row.

The second game in the best-of-seven series is back in Toronto on Monday.

The Raptors were cheered by a frenzied crowd at the Scotiabank Arena that included rapper Drake, who is an ambassador for the team, while thousands of fans took to the streets of Toronto.

“I love it because the one thing we must do in this series is go for it, and that [game] showed no hesitancy, our confidence, and our willingness to just kind of go for it,” said Raptors coach Nick Nurse.

Nurse was full of praise for Siakam, who had been studying to become a priest when he was scouted by former NBA player Luc Mbah a Moute and chosen to attend a ‘Basketball Without Borders’ camp.

The forward from Cameroon, who was drafted by the Raptors in 2016, was playing in the NBA development league two years ago.

“Pascal had a big offensive night. I thought he played with really good composure,” added Nurse.

Siakam, who scored six from six in the third quarter, said: “It’s amazing and it just shows if you put the work in. It’s something that is so cliche, but that’s the story of my life.”

The Warriors, without the injured Kevin Durrant, got to within three points in the fourth quarter but the Raptors held on.

Head coach Steve Kerr, who has guided his team to their fifth consecutive Finals, said: “Their defence was great and it wasn’t our best night, but we just got outplayed, simple as that. Move on to the next one.”

Drake, who was reportedly warned about his courtside behaviour during his team’s run to the Finals, arrived at game one in a Raptors Dell Curry jersey, in a nod to Stephen Curry’s dad who played for the Canadian side from 1999-2000.

He also covered up tattoos on his arm which are dedicated to Curry and Durant.

After the game he shared some words with Draymond Green, appearing to call the Warriors forward “trash” as the players walked off the court.

Drake also shared some words with Curry during the game and afterwards posted a picture on Instagram with the caption: “Steph Curry hair lint for sale on my eBay right now!!! username: DraymondShouldntWear23”.