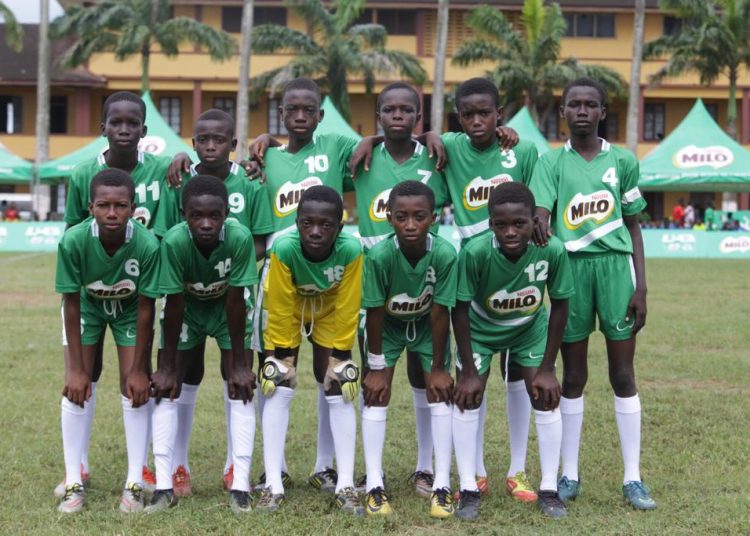 Myohuang Forces needed all the forces available to overcome a tough to crack Juaboso side. A second-half goal from Kweku Opare was enough to send the defending champions to their second successive zonal finals.

The championship ICON, Stephen Appiah couldn’t make this zone due to the national assignment with the Black Stars of Ghana in Dubai for their preparation ahead of the AFCON.

Former Black Stars striker and a good friend of Appiah, Augustine Ahinful, took off the championship touch to take the kids through the act of defending, dribbling skills coupled with some agility drills and teamwork with the assistance of the technical director for the Ghana Football Association, Oti Akenteng.

The various 16 participating schools were taken through validity checks by the director of PE from the Ghana Eduction Service.

Central Regional had to be grouped into A and B, they had eight schools representing them with a slot available for them at the national finals. Group A had Excellence Preparatory, Dankwakrom D/A Primary, Precious Gift International, Talent Bridge Academy while Freeman Methodist Basic, A&D Memorial, Nyenesi Catholic Primary and Ajumako BA Presby battled it out in group B.

The games started with a heated game between Alavanyo D/A against Myohuang Basics, a great game which ended with the Alavanyo lads winning 2-0 against the Myohuand Basics lads.

A total of 21 games were honoured on the first day but the highlights of the first round of matches were games between Myohuang Forces and Myohuang Basics where the forces where too much for Barracks lads to handle and the game ended 2-0.

The other high profile game was between Nyenesi Catholic and A&D Memorial as both met in the final group game to decide who advanced to the next phase. Both were on 6 points before kick-off but it was Nyenesi who won the game on penalties after it ended goalless within regulation time to set up a decider against Talent Bridge Academy.

Day one concluded with 2 schools confirming their place in the national finals: Myohuang Forces and Juaboso D/A from the Western and Western North Regions respectively.

Day two started on an escalating note as the decider for who represents the central region was the first on the list, the game between Talent Bridge Academy and Nyenesi Catholic Primary.

As their name suggests, Talents Bridge had more than enough talents in their ranks to brush aside their regional challengers. They were too much for Nyenesi on the day, the game ended 2-0 as Talent Bridge became the third and final side to book their place from Zone 3 in the national finals.

A ballot had to be conducted to know who would draw a bye by and who would face who in the semis.

Talent Bridge Academy were the fortunate ones as they picked the standby option while Myohuang Forces went up against Juaboso D/A in the semis.

The final game was what everybody at the ground expected. The highest scoring side, Talent Bridge Academy with 13 goals scored against the best defensive side Myohuang Force who had not conceded in the whole tournament.

It was exciting, interesting and intriguing as both sides entertained the crowd with dazzling skills and brilliant teamwork. It was Myohuang Forces that took the early initiative to hit the first goal of the game.

Daniel Afful scored the opener in the first half for his side against the run of play. The goal didn’t force Talent Bridge into panic mode. They kept their shape and played their tested system. Their pressure paid off as on the stroke of half time they had a penalty decision going their way.

Their skipper and potential player of the tournament, Matthew Addae stepped up but was denied superbly by Forces’ goalkeeper Edmund Kwofie to end the first half with Myohuang Forces leading.

Back from recess, Talent Bridge didn’t leave anything to chance. They pressed high and pushed for the equaliser and their pressure paid off as Emmanuel Arthur finally restored parity for his side with a beautiful solo goal.

That didn’t last long as their jubilation was cut short by Kweku Opare who scored his second goal of the final to give his side the lead which happened to be the winner for his side.

Zone 4 will take center stage from Wednesday June 12, live from the Kpando Senior High School and will involve schools in Greater, Oti and Volta Regions.

Zone 4 of the Milo Under 13 Champions league will come off from Wednesday, 12th June to Friday, 14th June at the Kpando Senior High school in the Volta Region. Zone 4 comprises of 16 schools from, Eastern, Volta, Oti and Greater Accra Regions.