despite missing out on Final 23 man squad 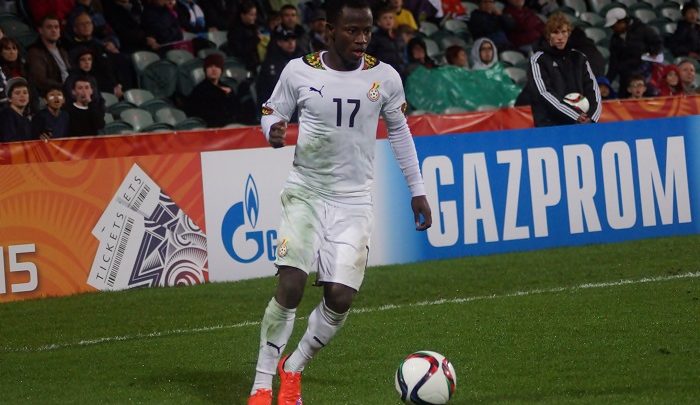 Ghana and Numancia forward Yaw Yeboah has described his brief spell with the Black Stars as an important piece of his learning curve as a young footballer.

The former Ghana U – 20 player was among the five players omitted from Ghana’s final 23 man squad for the Afcon in Egypt.

The 22 year old spent the 2018/2019 season on loan at Spanish Segunda side Numancia where he made 32 appearances and was also on target twice.

Yeboah has shown himself capable of playing as a central midfielder and also in either of the wide positions and featured alongside Ebenezer Ofori in Ghana’s friendly loss to Namibia.

He admitted that being a part of the provisional team itself was a privilege.

“I want to thank everybody,the management and the nation for giving me the chance to be here.

“It is not easy to be part of the senior national team and also to be playing alongside big names like Gyan,Andre,Atsu and the likes.

“These are players with big reputations in Ghana and Africa and for me its a pleasure to be playing with them and I have learnt a lot.

“Playing under a wonderful manager like Kwesi Appiah and also reputable names like coach Tanko makes me feel special.

“I feel like I am playing under some good people and when that happens good things happen to you.

“I want to wish my teammate well,our prayers are behind them as they head to the tournament.” he stated.

The former Man City academy product Yeboah is expected to play a key role for Ghana’s U – 23 side as they seek qualification to the 2020 Tokyo Olympic games.