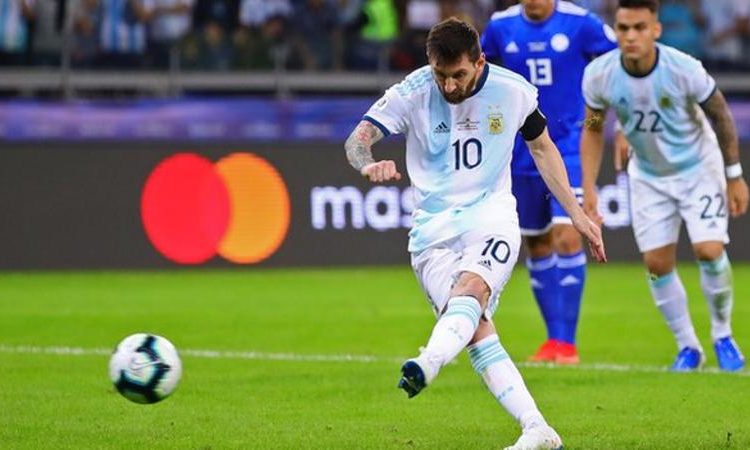 The Barcelona forward is playing at his eighth major tournament with Argentina and has already lost four major finals (Image credit: Getty Images)

Lionel Messi salvaged a vital point for Argentina as they struggled in a 1-1 draw against Paraguay in the Copa America in Belo Horizonte.

Argentina remain bottom of Group B with one point from two games.

“We are lucky that we are still alive in this tournament,” said coach Lionel Scaloni, whose side must win Sunday’s fixture against Qatar.

“Our first half was not good, we played with desperation at times and we couldn’t control the play or create attacks. We had a very clear plan but couldn’t execute it as we kept losing the ball.

“They scored with their first attack and that caused us a lot of uncertainty. For a team like Argentina, which feels like it always has to win, the first blow is hard to take, but we assured the players at half-time that it was just one goal.”

Minutes after Messi’s equaliser, Paraguay were awarded a spot-kick of their own but Derlis Gonzalez’s effort was punched away by Argentina keeper Franco Armani, who narrowly avoided a red card when he fouled Gonzalez outside his area at the end of the first half.

“We trust Franco. He is our starting goalkeeper. He saved a penalty and kept us alive. I’m glad he had a good performance,” Scaloni said.

The draw followed their opening defeat by Colombia on Saturday. The two best third-placed teams advance to the quarter-finals, meaning Argentina will be knocked out of the tournament with anything less than a win against Asian Cup winners Qatar.

Elsewhere in Group B, Colombia clinched the top spot with six points with a 1-0 win over Qatar.

Paraguay, who were held to a 2-2 draw with Qatar in their first game, are second on two points and must beat Colombia to be guaranteed a spot in the quarter-finals.

FIFA takes over running of CAF