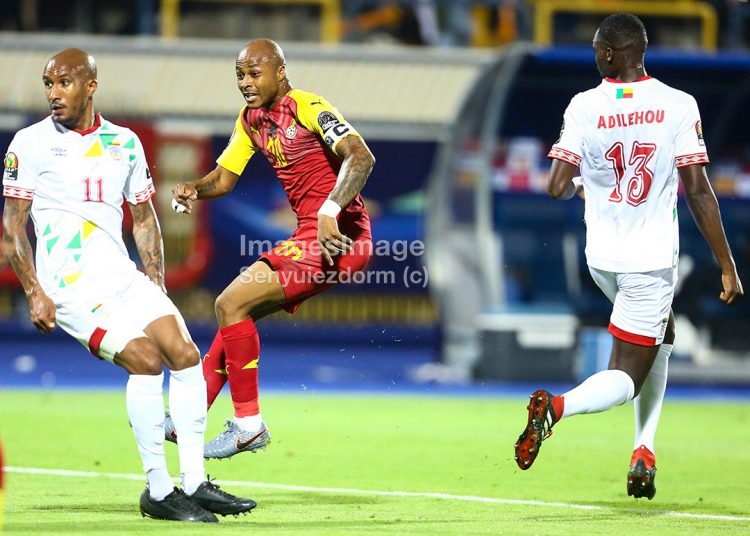 Ghana opened its 2019 Africa Cup of Nations with a riveting 2-2 draw with Benin in Group F at the Ismailia Stadium.

Benin scored inajded 2 minutes through Mikael Pote but two fantastic goals from Ghana captain Andre Ayew and brother Jordan give Ghana a 2-1 lead at half time.

John Boye was then sent off 10 minutes into the second half before Pote scored his second of the game to tie the result.

Ghana shocked under 2 minutes as Thomas Partey’s sloppy pass was intercepted by Mikael Frank Pote who bamboozled his way through the Ghana defense to finish nearly.

As Ghana ran off to celebrate, Partey was quick to fetch the ball from his own net with with the confidence of an unshaken rain dripped bird, but deep down, he and his teammates looked like they had just bobbed  up bellywise from stream of sleep, still dazed.

The Black Stars had to respond and they did within 5 minutes. Andy Yiadom lifted a sweet ball over the top to pick up the intelligent run of Jordan Ayew. He picked out his brother with a cut back and Andre Ayew’s first touch created space for him to unleash fabulous strike into the bottom corner. Ghana were level.

The goal took the Ghana captain to 9 goals, the record Ghanaian goalscorer at the Africa Cup of Nations.

Thomas Agyapong injured himself and was by another Afcon debutant Samuel Owusu.

But just before half time, Jordan Ayew showed interstellar brilliance to beat his marker in the turn before unleash stupendous strike into the roof of the net.

It was nothing short of deserved for the BlackStars and for Jordan in particular.

At the start of the second half, John Boye was given his marching orders for one of the silliest things you’d ever see on a football match. Having been booked for a wild challenge in the first half, he received a second yellow for time wasting just a mere 10 minutes into the second half.

A typical moment of brain freeze for the Metz defender. And not for the first time in his Black Stars career.

Kwesi Appiah brought out Samuel Owusu and threw in Jonathan Mensah to maintain his defensive shape.

Soon after, Benin were level, Pote with a neat finish following a fine short corner routine; his second of the game.

On 70 minutes Partey’s piledrive from the free-kick was tipped over by Fabian Farnolle as Ghana went in search of the winning goal.

But that was to be the most significant action of the remaining 20 minutes as Ghana survived a late onslaught from Michel Dussuyer’s team.

Ghana will next play Cameroon on Saturday.