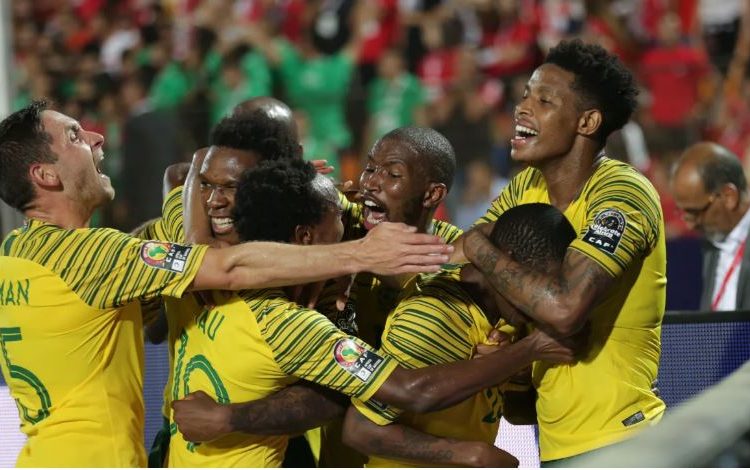 Thembikosi Lorch scored what proved to be the game’s lone goal five minutes from time to produce on Africa Cup of Nations all time surprises.

South Africa will now face Nigeria on Wednesday (10 July 2019) with a place in the semifinal at stake.

Hosts and record champions Egypt will have themselves to blame after losing the chance of a record extending eighth title at home despite the huge support of more than 70000 fans at the infamous Cairo International Stadium.

Against all expectations, South Africa were the first to test Egypt’s goalkeeper Mohamed Elshenawy through Thembinkosi Lorch after just two minutes but the Pharaohs goalkeeper was up to the challenge.

Egypt responded with Mohamed Salah making use of Ahmed Elmohamady cross but the Liverpool striker shot was deflected to a corner.

Bafana Bafana had the upper hand and threatened Elshenawy more than once in the opening half. At the quarter hour mark Elshenawy was up to Percy Tau shot. He was there again to stop another shot from Tau after 22 minutes with the South Africans looking nearer to take the lead.

Against the run of play, Salah led a counter attack and fed Mahmoud Trezeguet whose shot caused no problem to South Africa’s goalkeeper Ronwen Williams. Kamohelo Mokutjo sent a scorcher after 36 minutes but it missed the target narrowly. And three minutes later Elshenawy came to Egypt’s rescue again when he used his feet to stop Lorch from close distance to see the opening half ending goalless.

Egypt started the second half with an attempt from Mohamed Elneny who tried from distance but missed the target. Both sides tried to control possession but without real threat on target till the 58th minute when Salah’s through pass reached Trezeguet whose shot was stopped by Williams.

Lorch once again could have given South Africa the lead after 72 minutes but Elshenawy once again was there to save the hosts.

And five minutes to the end Egypt hat to deal with the shock. Lebo Mosiba caught Egypt defense napping and found Lorch who went one on one with Elshenawy to score what proved to be the shocking winner for Bafana Bafana.