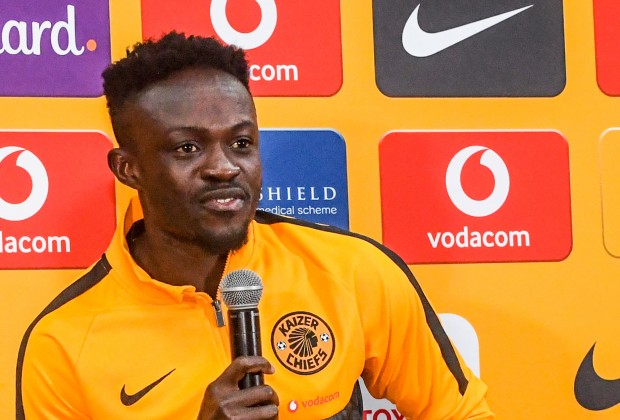 Ghanaian midfielder James Kotei says he is ready for the demands that will come with featuring for South Africa’s mist successful club.

Kotei was unveiled on Tuesday as one of Kaizer Chiefs’ four new players for the coming season after he joined them in June after leaving Simba of Tanzania on a free transfer despite performances that got him the Midfielder of the Year accolade.

Chiefs were strongly linked to him and were ultimately successful in their pursuit.

Kotei spoke at the unveiling and stated that he was very sure of dealing with the pressure of playing for a top club like Chiefs.

“It is a burden and a huge task that has been laid upon us the players. We have to redeem the image of this club. I learned that for the last four years, the team has not won a title.

It is a our duty as players to work our hearts out and help the club.

Obviously, there will be pressure but we do not have to let that get to us. We have to forget about that and everything and work hard. If we work hard, everything is possible.”

Kotei will be wearing jersey number 5 for the Amakhosi and he may play a part in the Carling Black Label Cup on July 27 against rivals, Orlando Pirates.

His Premier Soccer League campaign starts on August 4 away at Highlands Park.