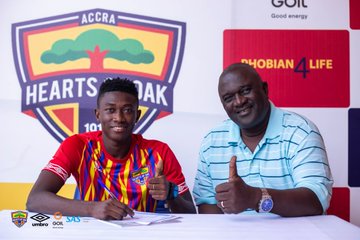 Hearts of Oak wonder kid Manaf Umar has signed an improved contract with the club set to last until 2022.

The attacking midfielder caught the eye of many observers during the NC Special Tier 1 competition, where Hearts were kicked out at the semi final stage, on penalties, by eventual winners Asante Kotoko.

The deal however involves additional incentives to the player’s contractual earnings, and not the length of the contract.

Hearts announced the deal on their official Twitter handle on Thursday.

Attacking midfielder Manaf Umar has signed an improved contract at the club as he looks to take his career to new heights in the famous rainbow colours. #AHOSC❤️💛💙 pic.twitter.com/uGQCEaHTgo

The youngster joined the senior team from Hearts’ youth side Auroras in January 2019.