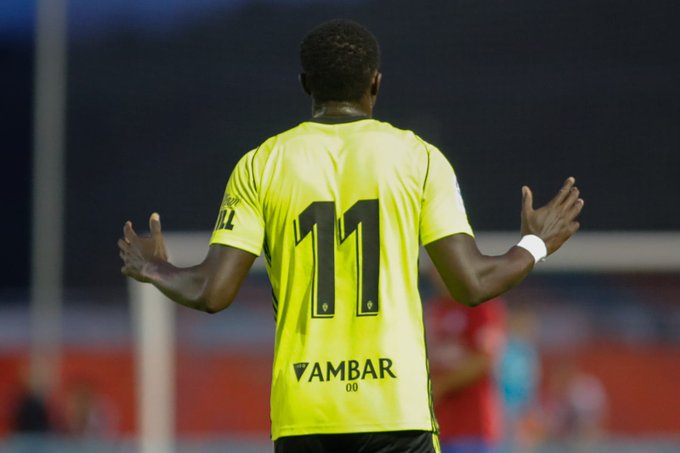 Having already netted nine goals in his first two preseason games for Real Zaragoza, Black Stars striker, Raphael Dwamena is showing no signs of slowing down.

The striker bagged two goals, having come off the bench in Zaragoza’s game against Calahorra, after blanking in their previous game against Ebro.

It takes his tally in preseason for his new club to an astonishing 11 goals in just four games.

After failing to find the net in the previous game, Dwamena dropped to the bench for the game with Calahorra as the manager continued to rotate his squad.

He came on in the 56th minute with Zaragoza already two-nil up and made an almost instant impact four minutes later.

Running onto a long pass, Dwamena was through on goal and coolly slotted the ball under the onrushing goalkeeper for his first.

Dwamena remained a real threat for the rest of the game and got a deserved second in the 84th minute when he rounded the goalkeeper near the center circle, steadied himself and found the net.

Dwamena secured a season-long loan move to Zaragoza from Levante and, having quickly become a fan favourite, he’s on his way to becoming a cult hero.

In the Spanish Segunda División side’s first pre-season game against Peña Ferranca, Dwamena found the net five times in a 13-0 win for Zaragoza.

In the next preseason game against Boltaña, Dwamena had to settle for a place on the bench from the start but came on to astonishing effect, scoring four times and laying on two more for his teammates as his side won 19-0.

The player, on both occasions, took to Facebook to offer updates to his fans and also thank God.

These games might not have been against top-quality opposition but Raphael Dwamena will hope his 11-goal haul in just four matches is a sign that he is ready to turn the corner after a disappointing year.