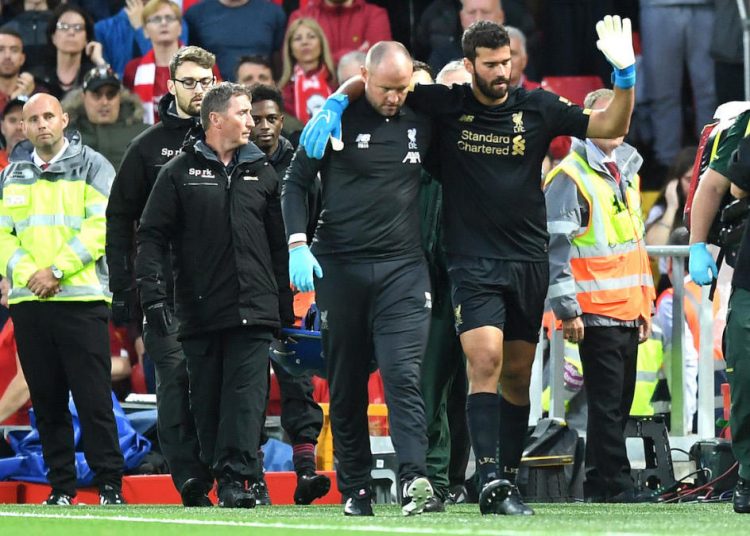 Liverpool boss Jurgen Klopp has confirmed goalkeeper Alisson will be sidelined for the “next few weeks” with a calf injury.

The Brazil international was subbed off in the 39th minute of Liverpool’s 4-1 win against Norwich in their Premier League opener on Friday.

And Klopp expects to be without the Brazil international for a period of weeks.

“[It’s] Not too cool. It’s a calf injury which takes him obviously out for a while,” the boss told Liverpoolfc.com.

“I don’t want to make now [an] exact prognosis on when he will be back but it will not be Wednesday for sure, so now then we have to see. It takes a while, it takes a couple weeks for sure, and we have to see.

“I saw already like ‘six weeks’ and stuff like this, but Ali was not a lot injured in his career so I would like to wait a little bit to see how he develops in that process now, but he is not in for the next few weeks.”

However, Liverpool right-back, Trent Alexander Arnold has backed substitute goalkeeper, and new signing, Adrian to fill in the gap left by the Copa America winner.

He said: “[His experience] is the main thing, he knows what he is doing. He’s played a load of games, so he knows what it is about.

“The reception he got [on Friday], I think he feels as though the supporters are already behind him.

“Obviously when a keeper has to come off, it’s never too promising, so yes, I think everyone needs to get their head around [the fact] that he probably will be our keeper for the next few weeks and if so, then we have to live with that, embrace that and I’m sure he will learn from us.

“We will be able to make good connections with him and I think a lot of the lads have made bonds with him already because he’s such a good lad off the pitch.

“He’s a great lad to have around and obviously he is playing now, that is good for him and us.”

The Brazilian number one goalkeeper is set to be out for about 4-8 weeks which means he will miss the Super Cup tie against Premier League rivals, Chelsea.