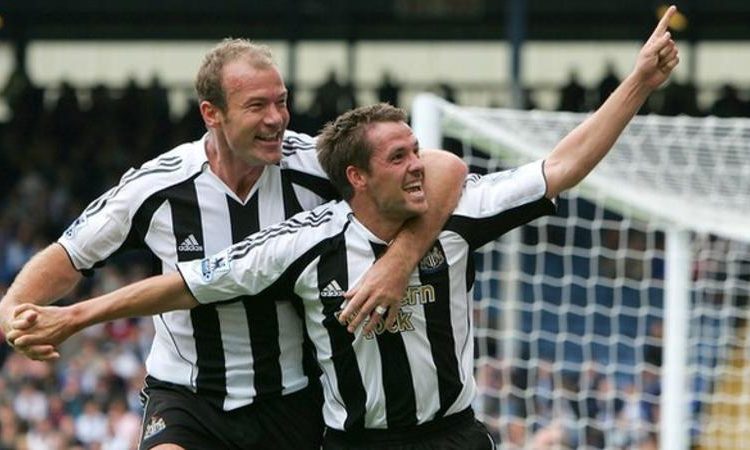 One of the more cutting lines in the book includes Owen’s claim that his transfer from Real Madrid to the Magpies in 2005 was a “downward step”and the one move he “really regrets”.

The pair exchanged barbed tweets as the story broke on Tuesday – but what is the background of their feud?

‘I couldn’t wait to retire’

In Reboot – My Life, My Time, which is being serialised in the Daily Mirror,Owen also goes into detail about his relationship with Newcastle’s fans during an injury-hit spell with the club, which ended with him joining Manchester United after the Magpies’ relegation to the Championship in 2009.

“I should have followed my gut instincts, I didn’t want to go there – my heart was set on a return to Liverpool,” said Owen – who had left Anfield for Real in 2004 – of his move to St James’ Park.

The 39-year-old former England captain also claimed Newcastle were “only a big club in the sense that it has a lot of fans and a big stadium”. Ouch.

Tweeting a clip of Owen telling BT Sport in 2018 that he “couldn’t wait to retire for the final six or seven years” of his career, Shearer posted: “Yes, Michael, we thought that also, whilst on £120K a week.” 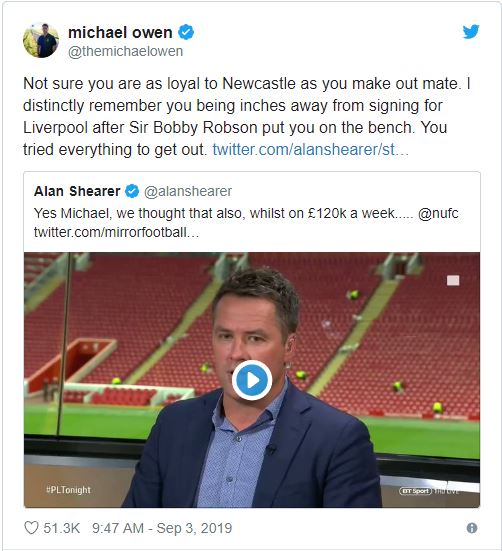 That retort certainly got people talking, but where did this bad blood start?

‘I felt I was a scapegoat’

Newcastle’s relegation in 2009 appears to be the catalyst for the pair’s strained relationship, according to Owen’s book.

Shearer was interim manager at the time and, going into the final day of the season, the Magpies needed at least a draw at Aston Villa or their 16-season spell in the Premier League would come to an end.

Owen claims he was not fully fit but, with Villa 1-0 up through Damien Duff’s own goal, the striker came on as a substitute in the 66th minute.

Newcastle could not find a response and were condemned to the Championship, and Owen alleges Shearer was “seething” with him and insinuated the player “had an eye on my next contract”, with his existing deal about to run out.

“I felt I was being made a scapegoat,” said Owen.

“When you analyze it, it all makes sense. Shearer’s record as a manager in the last eight games of that 2008-09 season was dire: lost five, drew two, won one.”

Of his 49-year-old former England team-mate, Owen added: “Alan Shearer and I still haven’t talked this out face to face and that’s a shame because, as I’ve said many, many times, we were very good friends.”

He then goes on to explain he had been part of an extensive interview with BT Sport in 2018 where he had touched upon his experiences with injury in his career and was taken aback by how Shearer had “started sniping about it on Twitter”.

Owen claims he had a text conversation with Shearer following this tweet where he offered an explanation after Shearer had said Newcastle fans would be “unimpressed to hear he didn’t enjoy playing there”.

“It went, as I suspected, precisely nowhere,” he added.

Gary Lineker, who hosts Match of the Day alongside Shearer as well as working with Owen on BT Sport, later acted as peacemaker as the spat continued.

“There appears to be a bit of history here? I like you both so don’t want to pick sides,” he tweeted.

US Open 2019: Roger Federer goes out to Grigor Dimitrov