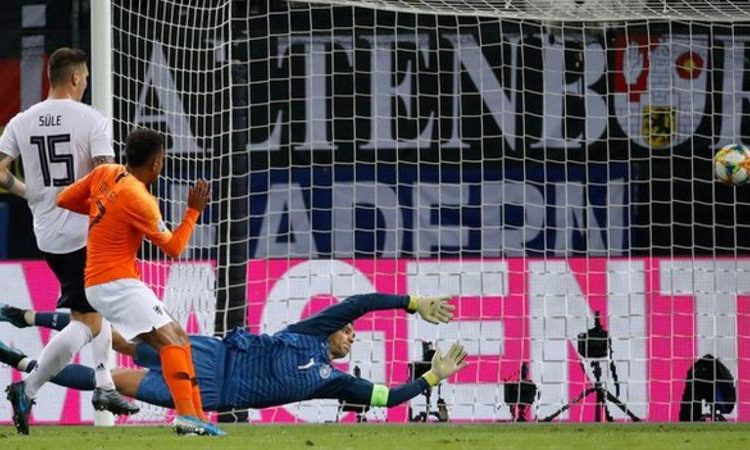 Malen scored on his debut for the Dutch, having come off the bench (Image credit: Getty Images)

A superb second-half display gave the Netherlands an important Euro 2020 qualifying win over Germany in a thrilling, see-saw game in Hamburg.

Serge Gnabry had given Germany an early lead but Frenkie de Jong and Jonathan Tah’s own goal turned the game.

Germany looked to have claimed a draw via Toni Kroos’ penalty, given for a dubious handball against De Jong.

The Netherlands’ victory – their first in Germany since 2002 – means Joachim Low’s side miss out on top spot in the group, which still belongs to Northern Ireland courtesy of their four wins out of four games so far.

The Dutch are now three points behind the second-placed Germans with a game in hand.

With Northern Ireland going so well and having lost 3-2 at home to Germany in March, Ronald Koeman’s side could not afford another slip-up, which looked on the cards after Gnabry followed up Lukas Klostermann’s saved shot to score his fifth international goal in six games.

But they were more efficient after the break, with De Jong’s neat finish and Tah’s clumsy poked own goal from close range rewarding their efforts.

Even the game’s most controversial moment – the penalty converted by Germany after the ball had looped onto De Jong’s arm following a blocked cross – could not break them from their stride.

Wijnaldum provided the ball for the Malen to put the visitors ahead again and then charged through to finish himself.

With two games against Northern Ireland to come, the Dutch are now firmly back in the running for top spot.

Belarus earned a stoppage time 2-1 win at Estonia to claim their first points in the other game in Group C on Friday.