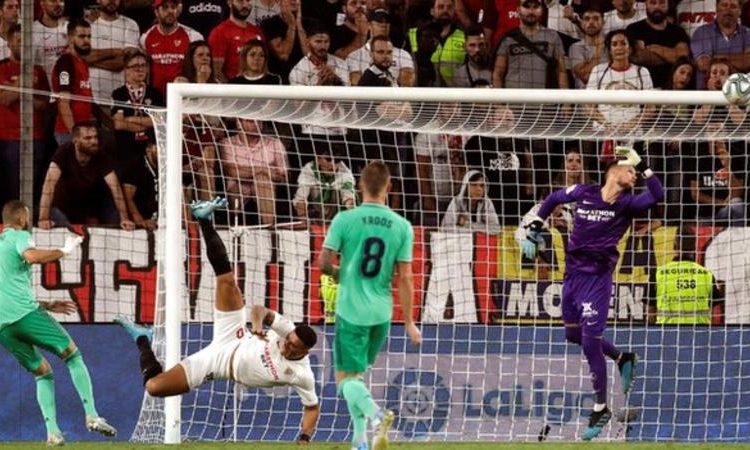 Real, who lost 3-0 to Paris St-Germain in their Champions League opener on Wednesday, climb to second in the table to ease the pressure on their manager.

Meanwhile, the hosts had a late Javier Hernandez goal ruled out for offside.

Sevilla – managed by former Real manager Julen Lopetegui who was sacked after four-and-a-half months in charge in October – fall to fifth following their first defeat of the season.

After their opening win over Celta Vigo, successive draws with Valladolid and Villarreal and a nervy 3-2 win against Levante had made for an unconvincing start to the season for Real.

That feeling was compounded by a heavy defeat to PSG, which left Zidane with a win ratio of below 50% since returning for a second spell as manager towards the end of last season.

Sevilla, with three wins and as many clean sheets from their opening four games, offered a stern test of character and one which, ultimately, Real were able to scrap their way through.

In a game of few clear-cut chances, Vaclik stood strong to deny both Hazard and Dani Carvajal at close-range, while Sevilla failed to land any of their nine shots on target.

The hosts had looked to be edging closer to a goal when Benzema met Carvajal’s floated cross with a powerful header after 64 minutes to score his fifth goal of the campaign.

Substitute Hernandez, making a first La Liga start since a summer move from West Ham, converted from an offside position for Sevilla in the closing minutes as Real recorded a first clean sheet since 28 April.