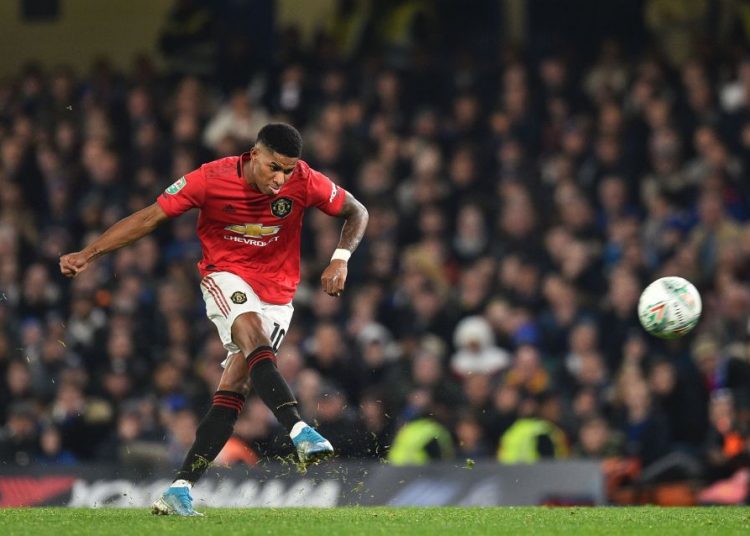 Marcus Rashford scored a stunning free-kick and a penalty as Manchester United knocked Chelsea out of the Carabao Cup with a 2-1 win at Stamford Bridge.

The England striker put the Red Devils in front from the spot after Daniel James was felled by Marcos Alonso inside the Blues penalty area in the 26th minute.

Chelsea hauled themselves level through Michy Batshuayi after the Belgian held off four visiting defenders to drill into the bottom corner from 20 yards.

But Rashford’s stunning free-kick ended Chelsea’s seven-match winning streak as they failed to get a measure of revenge on United for their 4-0 defeat on the opening day of the season.

The teams have gone in opposite directions since then, with United struggling for form while Chelsea are fourth in the Premier League and joint top of their Champions League group.

However, it is now three straight wins – all away from home – for United to further ease the pressure on manager Ole Gunnar Solskjaer.

In a shift from the usual Carabao Cup policy adopted the bigger clubs, Blues boss Frank Lampard rested his younger players with Tammy Abraham, Mason Mount and Fikayo Tomori, all central to their recent winning run, dropping out of the starting line-up.

Yet both managers named strong sides, illustrating just how important they saw this match in the context of their seasons.

United took a 25th-minute lead after Daniel James won a penalty, the winger getting across Marcos Alonso in the area before tumbling to the deck.

Rashford may have missed a spot-kick against Norwich at the weekend, but he showed no sign of nerves as he calmly sent Willy Caballero the wrong way.

Solskjaer handed a start to Brandon Williams and the teenager made his mark on Callum Hudson-Odoi after the interval, throwing the Chelsea winger over the advertising hoardings yet somehow avoiding a yellow card.

Hudson-Odoi should have taken immediate revenge when Alonso crossed low into the box but he miskicked horribly in front of goal.

Chelsea had built up a head of steam and Billy Gilmour’s drive was bravely blocked by Marcos Rojo before Christian Pulisic, the hat-trick hero at Burnley on Saturday, dragged a shot wide.

Pulisic then sent Hudson-Odoi through with a fine ball over the top but the wideman’s dipping effort dropped too late.

They got their equaliser on the hour mark, Batshuayi nodding on Caballero’s clearance before turning away from Harry Maguire.

The Belgian frontman outstripped Maguire and Victor Lindelof before firing past Rojo and into the corner of Sergio Romero’s net.

But Rashford settled the match in the 73rd minute in spectacular fashion, lifting his shot over the wall and underneath Caballero’s crossbar before sliding on his knees in celebration in front of a delirious away end.