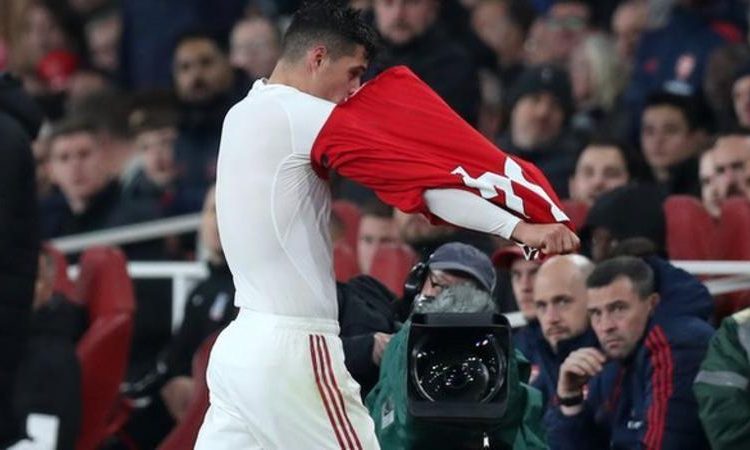 Granit Xhaka reacted angrily to the reaction from Arsenal fans when he was substituted against Crystal Palace on 27 October (Image credit': AFP)

Midfielder Granit Xhaka has been stripped of the Arsenal captaincy with Pierre-Emerick Aubameyang taking over, Gunners’ boss Unai Emery has confirmed.

Xhaka, 27, was involved in an angry confrontation with home fans during the Gunners’ 2-2 draw with Crystal Palace on 27 October.

“I had a meeting with him and told him he is no longer in the captain’s group,” said Emery on Tuesday.

“He accepted my decision. I needed to take a decision and now it’s closed.”

Last month, the Switzerland international was booed as he walked off the pitch at Emirates Stadium, prompting him to cup his ear, take his shirt off and head straight down the tunnel to the dressing room.

Emery later said Xhaka should apologise to the club’s supporters, saying the Swiss midfielder “knows he was wrong”.

However, Xhaka refused to go that far, although he did say he got “carried away” and reacted “disrespectfully” to fans.

“The scenes that took place around my substitution have moved me deeply,” Xhaka said in statement on Instagram last month. “I love this club and always give 100% on and off the pitch.

“My feeling of not being understood by fans, and repeated abusive comments at matches and in social media over the last weeks and months, have hurt me deeply.

“People have said things like, ‘We will break your legs’, ‘Kill your wife’ and ‘Wish that your daughter gets cancer’. That has stirred me up and I reached boiling point when I felt the rejection in the stadium on Sunday.”

Xhaka, who has not played since, has been left out of Arsenal’s squad for their Europa League game in Portugal against Vitoria Guimaraes on Wednesday.

He joined the club in a £35m move from German side Borussia Monchengladbach in 2016 and played in the 2017 FA Cup final as Arsenal beat Chelsea.

Xhaka, who is the captain of the Swiss national side, also helped the Gunners reach the League Cup final in 2018 and the final of the Europa League earlier this year.

Arsenal are fifth in the Premier League and play away at third-placed Leicester on Saturday.