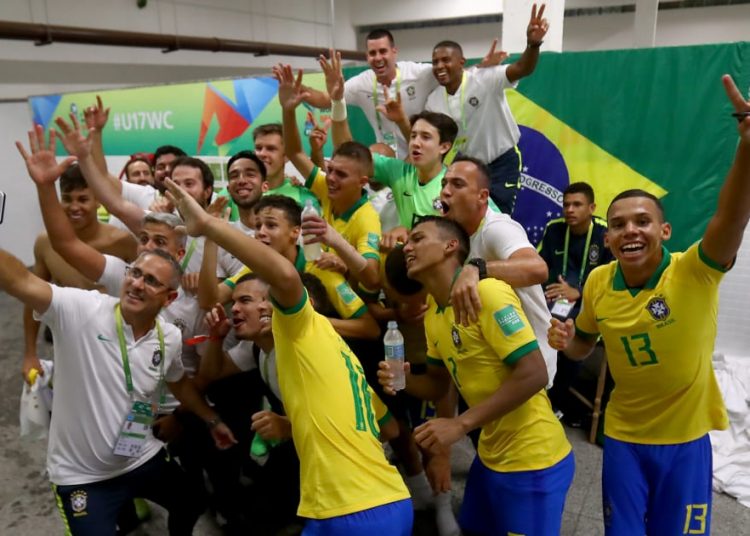 France and Brazil confidently claimed the last two semi-final slots at the FIFA U-17 World Cup™ on Monday, respectively eliminating Spain and Italy. The two teams join the Netherlands and Mexico, who will lock horns in the first semi-final on Thursday.

The day began with an avalanche of goals, to the extent that Les Bleuets’ 6-1 win over Spain represented the greatest margin of victory in a U-17 World Cup quarter-final.

The French, who are now the highest-scoring team in the tournament with 17 goals, have only reached the last four once before, at Trinidad and Tobago 2001, and on that occasion, they were crowned champions.

In the evening match, a large crowd at the Estadio Olimpico in Goiania rejoiced as the hosts put in their best performance of the competition thus far.

Exhibiting strength and style, the Brazilians forced Marco Molla, the Italian goalkeeper who had conceded the fewest goals up to that point, to twice pick the ball out of the back of his net, and they will now feature in a semi-final for the ninth time.

Of the four teams left in the tournament, Brazil boast the most tournament appearances.

Aouchiche adds assists
Adil Aouchiche was the top scorer at the 2019 UEFA European U-17 Championship and he inevitably arrived in Brazil with a goal-grabbing reputation, but the competition has also revealed his fantastic ability to create opportunities for his team-mates.

With a total of six assists to his name, the talented midfielder currently has the best record of any player in this department.

Against Spain, Aouchiche added two of those six, both accurately struck corners, and he rounded off a productive afternoon by emphatically sweeping the ball into the net in the closing stages for his first goal of the tournament and France’s sixth of the match.

2,200 reasons to be cheerful
Frenchman Isaac Lihadji hit the net just after half-time with a statistically significant strike: his straightforward back-post finish not only put Les Bleuets 3-1 up, but it also happened to be the 2,200th goal in the history of the U-17 World Cup.

Lucas in the limelight
Brazilian midfielder Pedro Lucas was not originally going to play at the U-17 World Cup, but the withdrawal of star player Reinier led to his inclusion in A Seleção’s 21-man squad.

Up until today he had not started a match, but an injury to another of the team’s major figures, Talles Magno, saw him brought into the line-up. The patient No19 responded with a high-quality performance, laying two goals on a plate for his grateful team-mates.