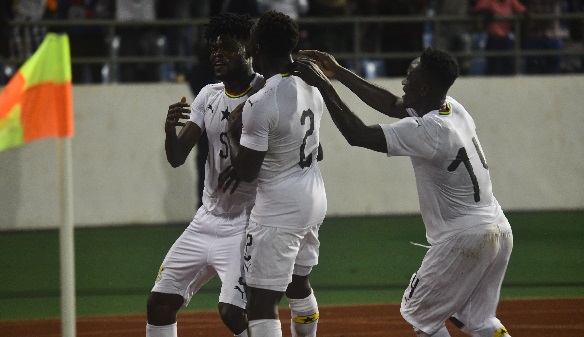 Black Stars midfielder, Thomas Partey believes Ghana’s match with São Tomé and Príncipe will be a difficult game and that the players are not used to playing on artificial pitches.

Speaking in an interview with Citi Sports, the Atletico Madrid star revealed playing on an artificial field will be difficult but remains positive Ghana can win the game.

“We are going to play a very difficult match.

We are not used to playing on artificial turfs but we are professionals and we have to get used to it and I think we are motivated enough and we have to do our best and get the win”.

In preparation for the upcoming AFCON qualifier, the 26-year-old says training at Madina is easier but expects a difficult atmosphere in São Tomé and Príncipe.

“Training here is easy but the difficulty will be when we go there. As I said, we are not used to playing with these kinds of pitches but we have to get used to it and come back home with the win”.

The midfielder expects a very difficult game when the Black Stars lock horns with the Falcons and True Parrots on Monday.

“I expect a difficult game with less possession, we have to rely on the second balls and if possible, attack more”.

Thomas Partey, 26, says he knew the quality the team possesses and added:

“I don’t know but personally I know we are working hard in training and giving our best to the team. I don’t know what the fans were expecting but I know what we can give and we are happy with the win”.

The Black Stars will play their second 2021 African Cup of Nations qualifiers in São Tomé and Príncipe on Monday at 1 pm.