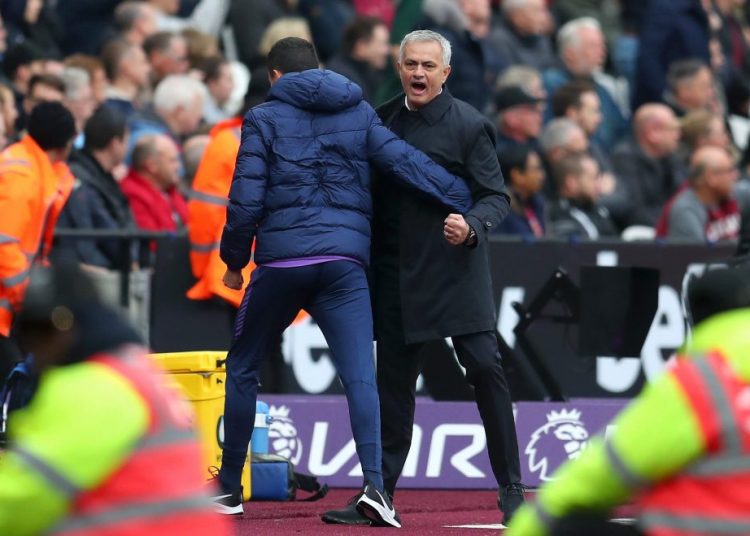 Jose Mourinho’s Tottenham reign got off to the perfect start as Spurs beat arch-rivals West Ham 3-2 at the London Stadium.

In their first game without Mauricio Pochettino for five-and-a-half years, Tottenham was virtually unrecognizable from the team which had failed to win away from home since January.

The electric Heung-min Son opened the scoring following fine work from Dele Alli, who looked much more like his usual self before Lucas Moura doubled the visitors’ lead on the stroke of half-time.

Buried amongst a resurgent performance from Spurs was another truly woeful display by West Ham – and the game continued in that pattern after the break.

Following a dreadful miss by Moura, Harry Kane netted his first goal of the new era with a thumping header to put the game to bed.

Mourinho will be disappointed that his side took their foot off the gas and offered West Ham a route back into the game when Antonio pulled one back with 15 minutes remaining.

They were fortunate for VAR, which disallowed a Declan Rice goal before Angelo Ognonna pulled another goal back just before the full-time as Spurs made a slight mess of their three-goal lead.

Nonetheless, the victory shines a positive light on their manager’s big opener and piles some serious pressure on his opposite number, Manuel Pellegrini, who’s future must surely be in doubt following their eighth game without a win.

Kane thought he had given them a perfect start inside the opening 10 minutes but he was offside after being played in by Alli.

After Son and Moura had gone close Spurs took a deserved lead in the 36th minute after a spell of pressure.

Alli played in Son down the left and the South Korean continued his penchant for scoring big goals by firing through the hands of Roberto, though the West Ham goalkeeper should have done better.

Spurs had Mourinho producing a knee-slide nine minutes later as they doubled their lead with an impressive goal.

Alli did well to keep the ball in, setting Son free at the same time, and the latter’s cross was rammed home at close range by Moura.

It was a big afternoon for Moura, who was named in the starting line-up after Mourinho had revealed he tried to sign him when he was in charge of Real Madrid, and he delivered an important goal.

Moura had already missed a great chance to add his second by the time Kane made it 3-0 in the 49th minute as the England captain notched his 21st goal of the season for club and country.

He was picked out superbly by Serge Aurier’s cross and planted a header in the back of the net to leave Mourinho chuckling on the sidelines.

For a period of time, it looked like it could have been as big a win as Spurs wanted, but West Ham at least restored some pride in the 73rd minute.

Antonio – a half-time substitute – got on the scoresheet with a rifled effort into the bottom corner from Mark Noble’s pass.

The hosts, who had been dreadful for so much of the game, looked like setting up a grandstand finish when Declan Rice swept home Sebastian Haller’s header, but VAR ruled that he was offside.

Ogbonna did get one back for West Ham with the very last action, scoring from a corner, to skew the scoreline, but this was Spurs’ day.

This was Mourinho’s day.