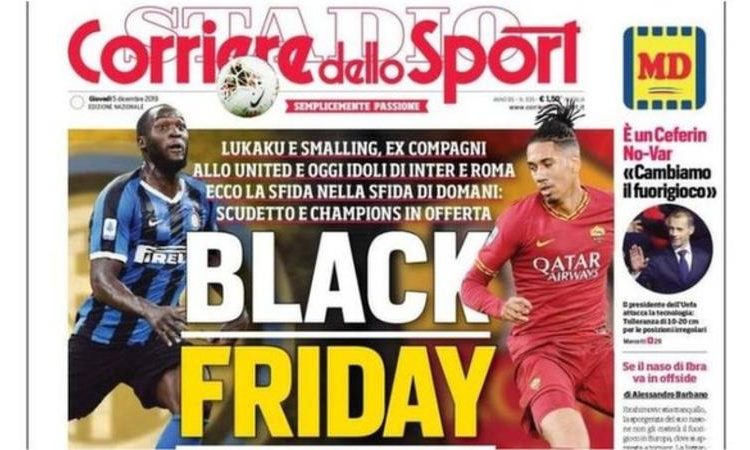 The headline accompanied pictures of Roma defender Chris Smalling and Inter Milan striker Romelu Lukaku prior to Friday’s match between their two sides.

“But this headline has totally overshadowed the anti-racist message contained within the story.”

“Football is passion, culture and brotherhood. We are and always will be opposed to any form of discrimination.”

Serie A club AC Milan said “it is totally unacceptable to see such casual ignorance on racism”, while Lukaku’s agent Federico Pastorello, who is Italian, said he was “really ashamed to read” such a headline.

“Being an agent, we are trying to protect our clients from this huge problem [racism] because it’s not only a newspaper but it’s a problem you can breathe in the stadium, in social media, on the street,” he told Sky Sports.

“For sure he [Lukaku] is not happy about that but he’s strong enough to face it.”

“White, blacks, yellows. To negate every difference is the typical massive error of ‘the racism of the anti-racisms’,” said the editorial.

“The mental rabble of those casual moralists. ‘Black Friday’, for those who want and can understand it, it was only a way to celebrate diversity.

Inter are the Serie A leaders on 37 points, while Roma are fifth on 28 points.

The article accompanying the headline called former Manchester United team-mates Lukaku and Smalling “the idols of Inter and Roma fans” and that their confrontation would be the “battle inside tomorrow’s big game”.

“They [Lukaku and Smalling] have learned how to respect each other. They have taken strong stances against racism.”

“Unfortunately, as we’ve seen on social media, more people will see that ill-judged headline on the front page than read the actual article and it creates new issues at a time when we are all trying to tackle the issue of racism in Italian football.”

This is the latest controversy during a season in which Serie A has had to deal a number of incidents of racism.

Only last week, all 20 Serie A clubs have made a united pledge to combat Italian football’s “serious problem” with racism because there is no more “time to waste”.

Lukaku said the abuse he suffered in September, when Cagliari fans made monkey noises after the Belgian scored a penalty against their team, showed the game was “going backwards”.

The Sardinian club were later cleared of racist chanting, leading the head of anti-discriminatory body Fare to say that Italian football authorities and their disciplinary systems to combat racism were “not fit for purpose”.

In response to the headline in Corriere dello Sport, Fare said in a social media post that “the media fuels racism every day”.

Ranked: Every Barcelona player by their release clause