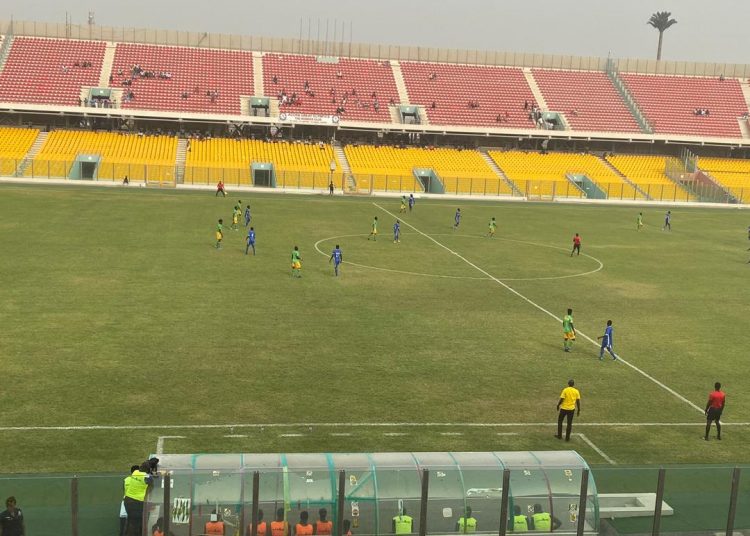 Accra Great Olympics were condemned to their second straight defeat in the Premier League after an injury time goal from substitute Nathan Kwasi Richard handed Aduana Stars a 1-0 victory at the Accra stadium on Sunday.

The game looked set to be heading for a draw before Nathan Kwasi’s effort broke Olympics hearts.

The first half was bereft of any attacking quality from either side with Great Olympics’ half chances only coming from set piece situations.

Gladson Awako, who was on free-kick duties for the Wonder Club could only manage to put all his efforts over the bar.

Aduana on the other hand struggled to link up with striker Yahaya Mohammed, whose hattrick last weekend seemed to have put the Olympics defense on high alert as he was closely marked.

Nonetheless, Aduana had the best chance of the first half, but Samuel Bioh fired wide from 10 yards after neat play from Noah Martey and Elvis Opoku released Bioh.

A barren first half set up a crucial second with Olympics desperate to avoid back to back defeats after their embarrassing 3-1 defeat to Ashantigold on the opening day.

They came close 10 minutes into the second half when Emmanuel Clottey’s strike from inside the box came off the upright before Aduana eventually cleared.

Awako then went down on the edge of the box but his appeal for a penalty was waved away by referee Eric Owusu Prempeh.

Aduana’s clearest opportunity in the second half fell to Pius Asante but his the effort rolled into the hands of Joshua Opoku.

Late on, the two goalkeepers produced superlative saves to ensure the spoils were shared.
.
First, Opoku stretched full length to tip Hahaha Mohammed’s free-kick over before Joseph Addo dove to his left to keep out Baba Aminu Mohammed’s drilled effort.

In injury time, Aduana stole the game at the death, with substitute Nathan Kwasi Richard guiding in a low cross from Yahaya Mohammed from the right side.

There was no enough time for Olympics to fight back as they were condemned to their second straight defeat.

Aduana on the other hand, make it two in two games as their early march to a title continues.