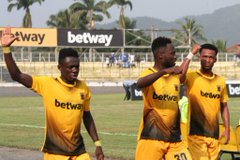 The clubs sponsored by bookmaking giants, Betway, put together commendable performances in week 2 of the Ghana Premier League.

Ashantigold and Aduana Stars grabbed wins to maintain their 100% start to the season while Liberty Professionals earned a hard-fought draw away to Berekum Chelsea.

Aduana Stars accounted for Great Olympics in a close game in Accra, prevailing 1-0 with an injury time strike from substitute Nathan Kwasi Richard.

The game looked set to be heading for a draw before Nathan Kwasi popped up at the far post to guide in Yahaya Mohammed’s cross.

2015 league champions Ashantigold made it two wins out of two matches after managing a narrow 1-0 victory against King Faisal in Kumasi.

Yakubu Mambo’s men, on the back of their 3-1 thumping of Great Olympics on match day 1, needed a second half goal from center back Yussif Mubarik to down a stubborn King Faisal side.

After Alexander Osei got sent off for a second yellow for handling the ball outside the box, Mubarik converted the resulting free-kick to hand the Miners all three points.

3 points secured. On to the next #Miners💛🖤 #WeMove💪 pic.twitter.com/HfjYOpYKv1

Liberty goalkeeper, Ganiu Shaibu, put up a man of the match performance to secure a point for the Scientific Soccer Lads on the road.

Liberty showed grit to come from 2-0 down to snatch a point at home to Legon Cities on the opening day and they needed even more grit to get a point in Berekum.

David Ocloo though, has his goalkeeper to thank after Shaibu put up a show to stop everything Chelsea threw his way.

Liberty remain unbeaten in the league after two matches.

Goal keeper Ganiwu Shaibu was superb today and was adjudged Man of the Match in our 0-0 draw away to Berekum Chelsea.