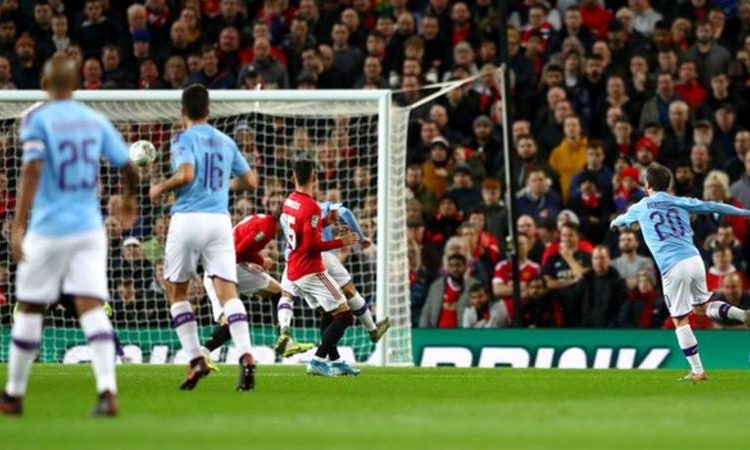 Holders Manchester City will take a commanding lead into the second leg of their Carabao Cup semi-final after outclassing neighbours Manchester United at Old Trafford.

Marcus Rashford’s late reply will give United hope they can still turn this tie around in the return on Wednesday, 29 January, but it should not deflect from City’s overwhelming superiority for the vast majority of the game.

Pep Guardiola’s side stunned the home fans with three first-half goals, and in truth they could have had many more before the break, such was the gulf between the two sides.

City, who left Sergio Aguero and Gabriel Jesus on the bench, started with a strikerless 4-4-2 system that saw Bernardo Silva and Kevin de Bruyne their furthest players forward.

It was Bernardo who broke the deadlock, with a superb strike from the edge of the box that arrowed into the top corner of the net.

Riyad Mahrez made it 2-0 when he ran on to Bernardo’s pass and rounded David de Gea, with the home side hopelessly exposed.

By now, United were chasing shadows and it was soon 3-0, as a swift breakaway ended with De Bruyne twisting Phil Jones inside out before seeing his shot saved by De Gea but ricochet in off Andreas Pereira.

United’s limp resistance and lack of threat saw them booed off by some supporters at the break but they at least showed some resolve when they emerged for the second half.

City seemed content with their advantage, and United at last began to enjoy time on the ball, although they did not force Claudio Bravo into any meaningful action before Rashford’s goal.

That came when the visitors, for once, gave the ball away cheaply and Mason Greenwood fed the England striker to run through and score.

United never threatened to deny City a famous victory however, and Ole Gunnar Solskjaer’s side are left with a huge task if they are to stop them reaching their third successive final, and their fourth in the past five years.