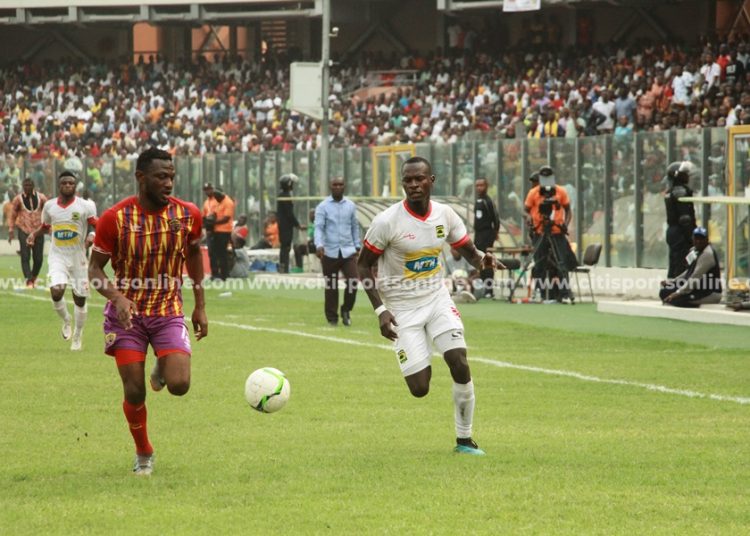 Asante Kotoko left it late to beat rivals Hearts of Oak 2 – 1 after striker Naby Keita converted from the penalty spot following a handball in the 89th minute.

Hearts of Oak started off the stronger of the two sides and attacked Kotoko mainly through Joseph Esso down the right flank but failed to capitalize on the early pressure.

A cross from Esso to the near post for Afriyje should have resulted in the opening goal of the game but the latter could only head wide.

Kotoko gradually grew into the game with Gyamfi making incursions into the Hearts of Oak half.

Through a combination of poor marking and a wonderfully taken set piece by Augustine Ocrah, Justice Blay connected with a glancing header in the 11th minute to send the away fans into fits of ecstasy.

Mudasiru should have doubled the lead for Asante Kotoko’s lead before the break after dancing through a maze of legs but saw his effort at goal narrowly miss the target.

Hearts finished the first half the stronger of the two sides following the injury to Mudasiru Salifu but barely tested Kwame Baah in post for Kotoko.

Hearts leveled the game in the 64th minute after Kodzie’s effort bounced off the cross bar but was headed back in by Joseph Esso.

Hearts goalkeeper Richard Attah pulled off the save of the game in the 75th minute from a headed effort after some brilliant wing play by Mathew Cudjoe.

Kotoko closed out the game on a strong note despite late pressure from Hearts of Oak and a penalty call that was not awarded to the home side.