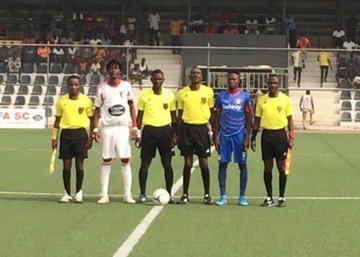 Forget Kumasi Asante Kotoko’s triumphant entry to Accra; or Legon Cities’ first ever conquest in the league this weekend; the biggest winners of match week 6 of the Ghana Premier League, and not just because they brought an end to WAFA’s impeccable home record, but the sheer mental strength required to get that win makes it an enormous one.

The week began sadly for the Betway-sponsored team. After throwing away an early lead to lose at home to regional rivals Accra Hearts of Oak on Sunday, the Scientific Soccer Lads lost the license to use their home grounds for Premier League matches on the Monday.

It appeared, things were about to take a turn for the worst. But club chairman, Dada Ansong intervened on Wednesday and by Thursday, Ocloo had rescinded his decision and was back to work.

Preparation had started in earnest for what was always going to be a difficult trip to Sogakope.

Ocloo only had one training session with the team on Thursday ahead of the game on Friday afternoon.

Liberty were bleeding, and WAFA’s job was presumably easy -“finish them!”

But Liberty dug deep, led by captain Elvis Kyei-Baffour , the Dansoman-based side showed immense mental fortitude to overpower a WAFA side that had not lost a game all season.

When Mubarak Alhassan raffled home the winner after Michael Ampadu’s ferocious effort came off the upright and back into play, the celebrations were wild. Rightly so. Liberty had not just won a football match, they had exhibited an ability to thrive amidst adversity, something Ocloo would have been proud to see.

It was a great end to terrible week and everyone at the club will hope they can turn a positive corner using the win at WAFA as a springboard.

Elsewhere, other Betway-backed clubs recorded mixed results on the road.

In Tarkwa, Ashantigold fell to back to back defeats when they lost to Medeama 1-0 and in the top of the table clash in Berekum, Medeama held Chelsea to a 1-0 draw.

Next up for the Betway trio on match week 7: