PL on Citi: Fernandes scores for Man United in their 3-0 win over Watford 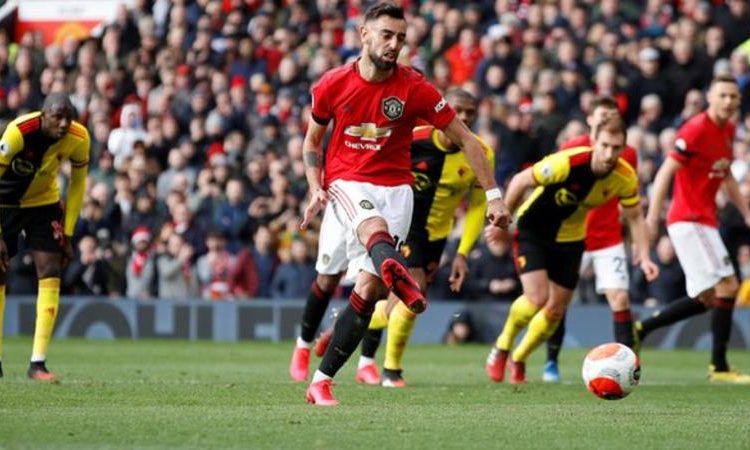 Fernandes scored his first goal for United from the penalty spot

Bruno Fernandes’ first Manchester United goal set his new club on their way to a comfortable home win against relegation-threatened Watford and into fifth in the Premier League.

Fernandes, a £47m January signing from Sporting Lisbon, converted a 42nd-minute penalty after he had been taken out by Watford keeper Ben Foster.

The goal ended a 236-minute wait for a United home goal in the Premier League after they had failed to score against Burnley and Wolves.

Anthony Martial scored an excellent second on Sunday after Watford’s Troy Deeney had a goal ruled out by VAR for handball in the build-up. Mason Greenwood, 18, lashed home his 11th of the season 15 minutes from time to complete United’s scoring.

Fernandes told the BBC it was a dream to score at Old Trafford. “This is the day every player wants to have. I feel lucky to score,” the Portuguese midfielder said.

“Everyone knows we want to get into the Champions League places. I am here to help the team conquer this place and keep winning games, it’s what I want to do, it’s what I need to do.”

After beating Chelsea at Stamford Bridge on Monday, it was only the third time this season that United had won successive Premier League games.