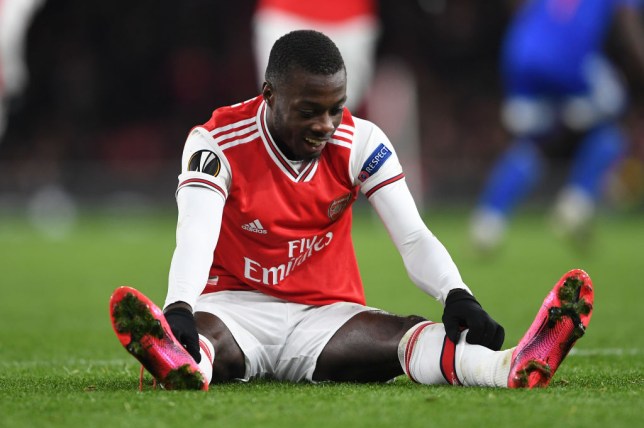 Arsenal winger, Nicolas Pepe is undoubtedly a technically-gifted player and a talented dribbler who isn’t shy of trying to beat opposition defenders.

That’s what drove Arsenal to sign the player from Lille last summer for £72m.

More average performances than good so far this season have left the patience of Arsenal fans to the Ivorian’s on-pitch antics a little thin.

Improved performances under new manager Mikel Arteta appeared to have got fans of the Gunners warming up to him.

Those feelings of frustration with the young winger returned fully during Arsenal’s Europa League exit at the hands of Olympiacos on Thursday night.

With Arsenal 1-0 down at home on the night and looking for a goal to take them ahead on aggregate in the 74th minute, Pepe controlled a ball on the left, beat one man and entered the box,

He then twisted and turned four times in the box, spurning a number of chances to cut the ball to a teammate – there were three of them in the box with him.

After the fourth turn, the defenders crowded around Pepe and got it clear for a corner.

This piece of play visibly frustrated strikers, Pierre-Emerick Aubameyang and Alexandre Lacazaette who were hoping for a cutback.

See the sequence below:

Don’t look at Pepe, look at the other Arsenal players getting frustrated with every useless Pepe move. This is amateurish, selfish and out of control (he couldn’t stop himself). pic.twitter.com/p3ajCvcVTM

“I think we have enough goal threat in this team but we have to put our chances to bed,” Arsenal boss Arteta when asked specifically about Pepe’s performance in his post-match press conference.

Arsenal fans were frustrated as well with many feeling that he tried to do a little too much.

I’d say that’s too much of show off right there.

Decision making is bad, should have shot or pass.