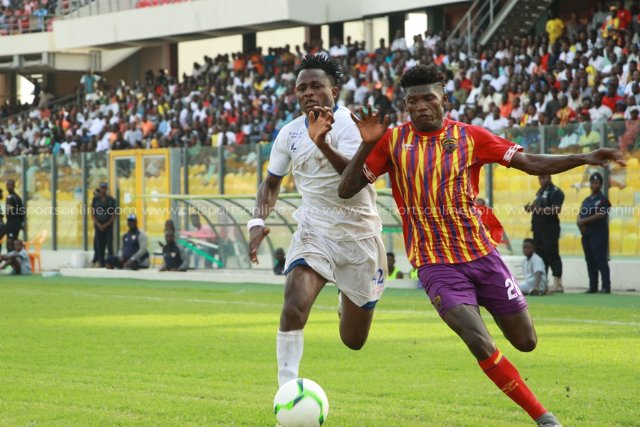 Hearts of Oak had to settle for a point, after they were held at home against Elmina Sharks in matchweek 12 action of the Ghana Premier League.

Both teams cancelled each other out in the opening embers of the game, with chances few and far between.

Hearts of Oak went close on the 14th minute mark, when Raddy Ovouka burst down the left flank and fired a shot across the face of goal.

Sharks opened the scoring after 25 minutes after sustained pressure, with Dennis Mensah superbly volleying home from a corner.

The goal sparked life into the game, with both teams creating some decent opportunities.

Kofi Kordzi fired in the equalizer for Hearts 7 minutes before halftime from a Fatawu Mohammed corner, to register his 6th goal of the campaign.

Hearts pushed for the lead before halftime, and had a golden chance to do so, but Joseph Esso’s shot hit the side netting.

The second half was very tensed, with both teams threatening on the counter attack.

Perhaps the biggest chance of the half came in the 82nd minute, when Benjamin Tweneboah broke free for Sharks in a two on one situation , but his attempted through pass was cut out by Hearts’ Mohammed Alhassan, only for the clearance to poop just over the top of the goal post, much to the relief of Hearts keeper Richard Atta.

The result means Hearts have now drawn five times this season, while picking up just two wins at home.