“Stay in Spain; other leagues will not suit your style”- Odartey Lamptey to Thomas Partey 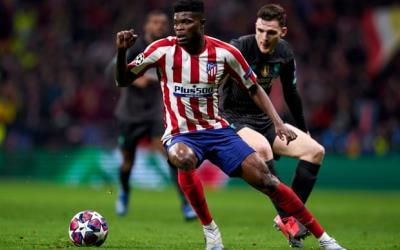 In the last few weeks, interest from teams like Arsenal and Manchester United in getting Partey’s services has been reported a lot in the media with many observers of the game urging Partey to make the switch.

Atletico have reportedly stated their intentions of keeping the player by offering him a new contract and doubling his wages.

Odartey Lamptey believes that the player should remain at the club or better yet, switch to another Spanish side since his style of play and that of the Premier League will be at variance and they will be detrimental to a career that is getting into a good place and he cited his stint at Aston Villa as a reference.

“For footballing reasons, I will not advise Partey to leave Spain for Italy or England. I say so because his style of play fits perfectly with La Liga and that guarantees the safety of a long career. Even if he wants to leave Atletico Madrid, he should go to another Spanish club.

In football, decision making is very important and it can destroy your career. I can say that my going to Aston Villa in 1994 was a bad idea because the football played in England at the time just did not suit me. If I had gone to France or Spain, things would have turned out well for me.”