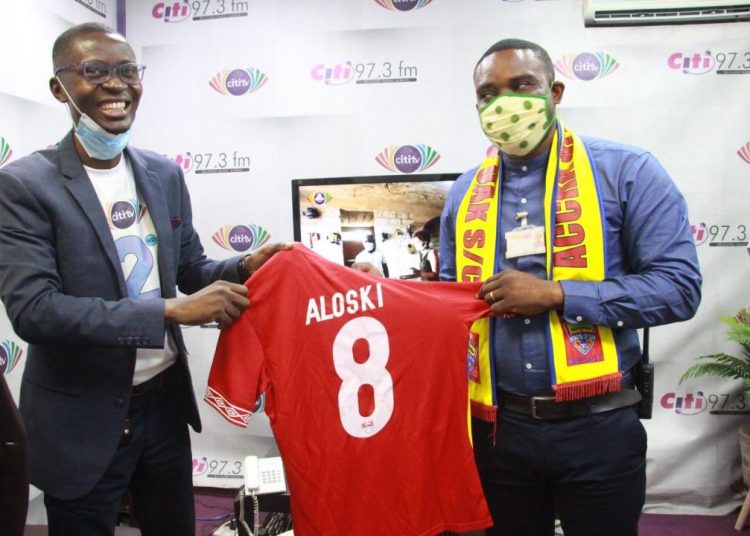 The club officials who described Mr. Avle as a “proud Phobian” added that Mr. Bernard Avle has  “truly demonstrated his love and passion for the club”

The Football club in a post on Twitter also described the host of Citi FM’s Breakfast show and Citi TV’s Point of View show as a “die in the wool” Phobian.

Hearts of Oak today made a presentation to a die in the wool Phobian, Bernard Avle, host of Citi FM’s Morning Show and, he truly demonstrated his love and passion for the club.
Bernard is indeed a proud Phobian.

The gesture by the club has since ignited a footballing conversation on social media site, Twitter with many including musician Manifest, joining in to show their support for the club.

Bernard Avle earlier this year in February declared his love for the rainbow team on Citi FM’s breakfast show, leading to a conversation that ignited a football fanbase discussion on the country’s most listened to English morning radio show.

A true super excited @benkoku receives a branded jersey
from Hearts of Oak..Aloski.

Mr. Bernard Avle in a post on Facebook and twitter, also thanked the club for the gesture with a quote from the club’s famous tagline, “until the bones are rotten”

Never say die until the bones are rotten! Phoooobia! pic.twitter.com/vEWeR9SvVC

The club was founded on 11 November 1911. Hearts of Oak won their first major match in 1922 when Sir Gordon Guggisberg, Governor of the Gold Coast, founded the Accra Football League. Hearts won 6 out of 12 seasons in this league.

In 1956, Hearts joined the Ghanaian football league and have flourished since.

In the year 2000, Hearts of Oak won the Ghana FA cup, the Ghana Premier League and for the first time in their history the CAF Champions League.

This was the most successful year in the Clubs’ history.