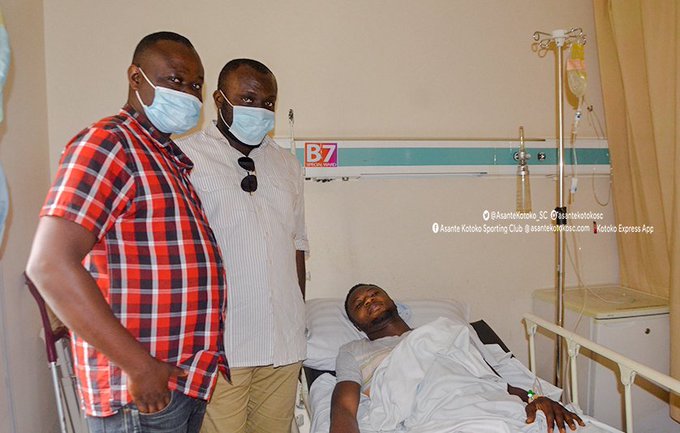 Asante Kotoko goalkeeper, Emmanuel Osei Kwame is expected to be out for six to eight months after undergoing a correctional surgery for a troubling knee last Wednesday.
The 25-year-old had previously been under the knife for an Anterior Cruciate Ligament (ACL) tear in his right knee while at former club Inter Allies in 2016.
A surgery was done on him, but poor management of the rehabilitation process caused it to recur shortly after joining the Porcupines in 2018.

It was discovered his knee was carved inwards and wobbling when he was presented to doctors at the Komfo Anokye Teaching Hospital (KATH) in Kumasi on Monday, June 1.
Osei Kwame had to go through the process again two days later with Head of the Trauma and Orthopaedic Department at KATH, Dr. Konadu Yeboah performing what has been described a career-saving surgery which lasted five hours and thirty minutes.
The lanky shot-stopper is expected to be sidelined for six months after which another surgery would be done to remove the implants from his knee to usher in his full recovery.
Explaining the process, Dr. Konadu told the Kotoko Express App:
“What we did was to perform a correctional surgery on the knee to stabilize it and return it to its original shape.
“We also reconstructed the Anterior Cruciate Ligament that has been torn for four years.
“We are now waiting for the reconstruction to heal solidly enough for him to return to the field. This is going to take six months.”
“While waiting, he has been taught to move the joints so that by the time it is fully healed, the joints will not be stiff,” he added.
Emmanuel Osei Kwame was discharged on Saturday and will continue his rehabilitation under the care of the club’s medical team and Dr. Konadu.