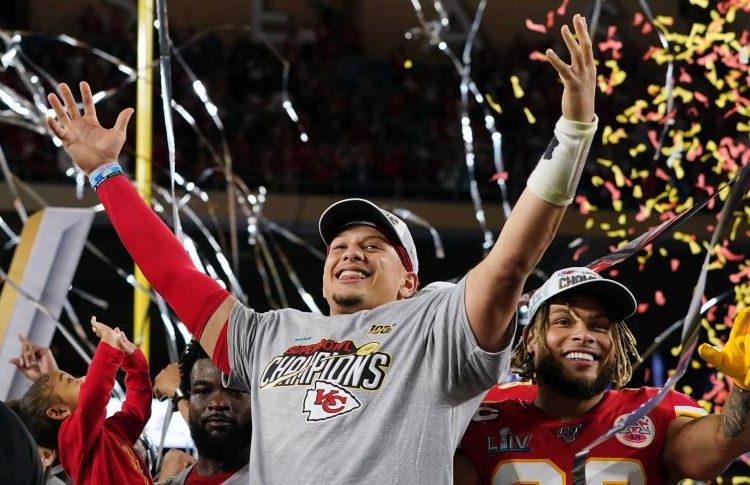 The Kansas City Chiefs have handed 24-year-old Super Bowl-winning quarterback Patrick Mahomes a contract extension reportedly worth between $US477 million and $US503 million.

Those numbers over 10 years are believed to be the biggest contract in the history of professional sport.

Mahomes still has two seasons left on his current contract — worth $2.8 million for the 2020 season slated to start in September, and $24.8 million for 2021 — which he signed as a rookie.

ESPN reported the new contract was worth at least $US450 million, but with the remaining money on his current deal, plus bonuses tied into the new one, the number could climb over $US500 million ($716 million).

That prompted Mahomes’s agency to label its client the “first half billion dollar player in sports history”.

The contract extension starts in 2022 when the NFL salary cap is projected to be $227.5 million, but that number could be lower depending on revenue losses due to the coronavirus pandemic and the possibility any games played this season will not have fans.

Mahomes will take up a big chunk of Kansas City’s salary cap, about 20 per cent, which could make it difficult for the Chiefs to sign other stars, but general manager Brett Veach said the contract allowed them to ensure Mahomes is not forced to be a one-man team.

“We’re going to continue to do everything we can to surround him with talent, and this deal provides us more flexibility to do that,” Veach said.

“He’s obviously an integral part to our success and we’re thrilled he’s going to be the quarterback of the Kansas City Chiefs for a long time.”

The danger with long contracts in a contact sport is that one bad knock can turn a no-brainer deal into a disastrous albatross.

Mahomes dealt with numerous injuries this past season, including a dislocated kneecap on a seemingly innocuous quarterback sneak that left him sidelined for a couple of games.

But he came back to lead the Chiefs on a long winning streak that culminated with a series of come-from-behind wins in the playoffs, including their second-half rally in the Super Bowl.

ESPN reported the new deal has a $US140 million guarantee in the event of a serious injury and a no-trade clause.

None of this takes into account Mahomes’s numerous endorsements, including lucrative deals with Adidas and Oakley.