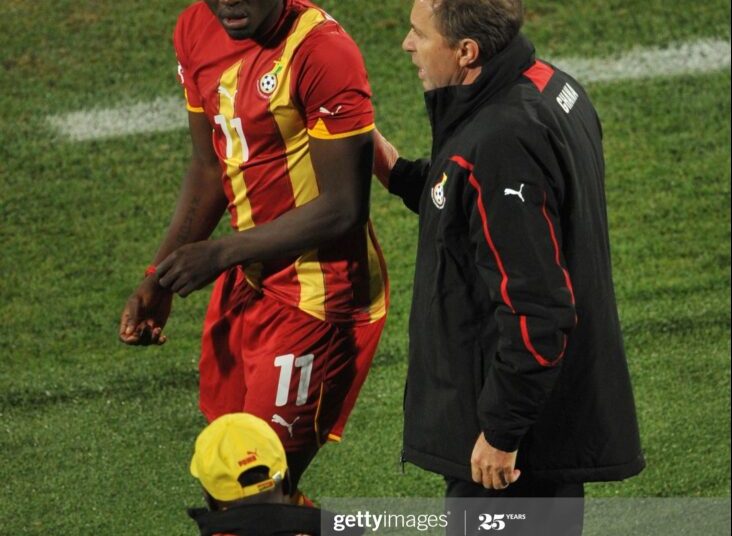 Ghana's coach Milovan Rajevac (R) talks to Ghana's midfielder Sulley Muntari before sending him in to play during the 2010 World Cup round of 16 football match USA vs. Ghana on June 26, 2010 at Royal Bafokeng stadium in Rustenburg. NO PUSH TO MOBILE / MOBILE USE SOLELY WITHIN EDITORIAL ARTICLE - AFP PHOTO / ROBERTO SCHMIDT (Photo credit should read ROBERTO SCHMIDT/AFP via Getty Images)

Ghana made history in the competition by reaching the quarter finals where they lost to Uruguay in the penalty shootout.

But the tournament was not without its fair share of problems off the pitch, with midfielder Sulley Muntari, who scored in the defeat to Uruguay, almost getting ousted from the team’s camp by head coach Milovan Rajevac.

According to the 42-year-old Kingson, Muntari was on the verge of exiting from the team’s base after verbally assaulting the head coach.

As narrated by ‘Olele’, Rajevac was on unhappy with Muntari’s utterances following Ghana’s 2nd group game, a 1-1 draw with Australia, and subsequently threatened to kick the then Inter Milan midfielder out of the tournament.

“We drew 1-1 with Australia and Sulley Muntari was not happy about the scoreline. After the game we were in the dressing room, Sulley didn’t play that game, he was on the bench.

“After the game, he was not happy about the result and was talking in the dressing room, he was talking in Twi and Italia. He didn’t understand why we should draw with an Australian team with one man down”, Kingson told Max TV.

According to Richard Kingson, it took the intervention of GFA officials including the boss, Kwesi Nyantakyi and Fred Pappoe to get Rajevac to rescind his decision.

“He said Sulley had to leave and we said no, he should let Sulley stay, he can decide not to play him but shouldn’t sack him from camp.

“The man still insisted Sulley must leave and we kept begging him even including Mr. Nyantakyi. Fred Pappoe was there including some of the senior players and the interpreter of the Coach. We begged him.

“The coach kept insisting Sulley leave and if Sulley had left it was also going to affect us so finally, I told him that if Sulley leaves, then I will also leave,” he added.

“At the time the Coach said he should leave, he was so sobber because he wanted to play. I said I will leave if Sulley leaves then I left the meeting.

“I asked Sulley what he said wrong, Sulley told me he said nothing wrong and that he only complained about the fact that we were celebrating after drawing with 10-man Australia”, he concluded.

The Black Stars of Ghana finished second in Group D on goal difference. The team went on to beat the United States of America 2-1 in the Round of 16 before succumbing to a penalty defeat to Uruguay in the Quarter-finals.