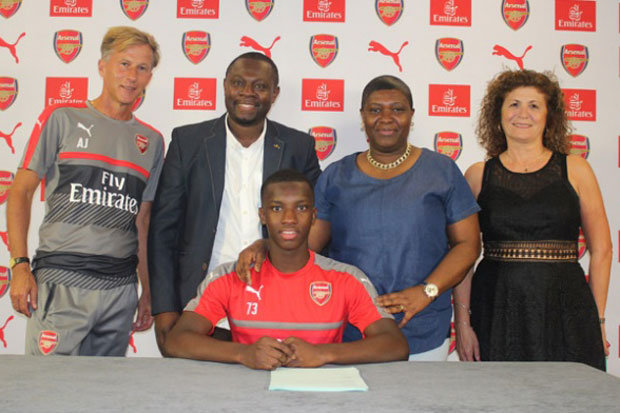 Edward Nketiah Snr, father of Arsenal footballer, Eddie Nketiah says news making waves that he is preventing his son from representing Ghana are ‘made up’.

The Arsenal striker has been courted by Ghana despite representing England at youth level.

After winning the FA Cup with The Gunners, the Ghana Football Association tweeted a congratulatory message, which generated the possibility of Eddie Nketiah switching nationalities to represent the country of his origin.

Earlier in the month of August 2020, one Vincent Owusu Appiah who claims to be the uncle of Eddie Nketiah stated in an interview with Wontumi Sports that the 21-year-old’s father is holding him back from representing Ghana.

“Eddie Nketiah’s father doesn’t want the boy to play for Ghana because of how some foreign players are treated”, he told Wontumi radio.

“The structures of Ghana football is not good, it’s part of the reasons why Eddie Nketiah’s father doesn’t want the boy to play for Ghana”.

“Eddie Nketiah’s main target is to settle in Arsenal before he focuses on either playing for Black Stars or The Three Lions of England”, he added.

“Kurt Okraku has contacted the father of Eddie Nketiah but the Father is not willing to let his son play for the Ghana Black Stars or even the Black Starlets of Ghana.”

He continued: “The GFA President Kurt Okraku should travel to London and have a meeting with the family and the player himself before I think an agreement can be reached.”

Contrary to this claim by Vincent Owusu Appiah, the father of the Arsenal protégé revealed in an interview with  journalist, Saddick Adams that the news making waves are ‘made up’.

Eddie Nketiah Snr, father of @Arsenal striker Eddie Nketiah, tells me reports about him preventing his son from playing for Ghana are “made up”.

Says he hasn’t spoken to anyone about Eddie and doesn’t know the so-called “uncle” Vincent Owusu Appiah who spoke to media pic.twitter.com/jeCJK5uLwd