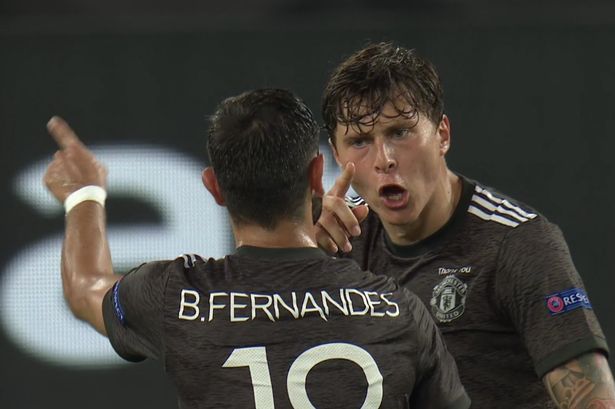 Manchester United attacker Bruno Fernandes has played down an on-field argument with defender Victor Lindelof after seeing his side crash out of the Europa League .

Despite Fernandes opening the scoring for the Red Devils after just nine minutes on Sunday , Sevilla would prove too strong with a 78th-minute strike from Luuk de Jong ensuring the La Liga side progressed to another final courtesy of a 2-1 win.

Following Sevilla’s decisive goal, Fernandes was filmed in a fiery exchange with Lindelof as the duo seemingly debated who was to blame for allowing the Spaniards to strike.

United were unable to find an equaliser after De Jong’s goal and have now been eliminated from European competition by a Spanish opponent for a third straight campaign.

Speaking post-match, Fernandes stressed his argument with Lindelof was ‘normal’ and a natural part of the game when there’s so much at stake.

“It’s normal when you concede. It’s not about me or Victor. What happened between me and Victor is normal,” Fernandes told BT Sport .

“It will happen many more times in football. We need to see the mistakes everybody did and improve.”

Across their past two matches, Ole Gunnar Solskjaer’s side have taken a total of 46 shots but have relied on penalties from Fernandes to find the back of the net.

The Portuguese star converted all 14 penalties he has taken this season and believes the Red Devils had to make more of their strong beginning to the match against Sevilla.

“More than a positive start. We played a great game and created a lot of chances. But in football it’s not enough – we missed a lot in front of goal,” he said.

“We are not satisfied about this because we wanted to go through. Now it’s time to rest and refresh the legs. Their keeper did very well, but the quality we have we should have scored.”

Manchester United have now gone three straight seasons without winning a major trophy – their longest such silverware drought since 1989.

Despite that lack of trophies, the Red Devils have shown signs of progress this season with the club finishing third in the Premier League.