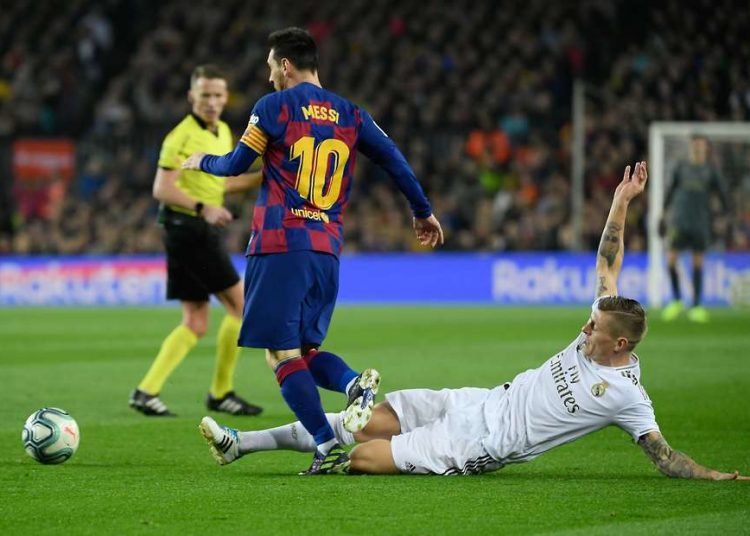 Messi, 33, at the end of a disappointing season handed in a transfer request to leave Barcelona after almost two decades at the club.

The Argentine’s current contract expires next summer with Barcelona desperate to tie him down for another two years.

Amid the speculations, Toni Kroos has come out to quench the rumours that Messi could switch camps to Real Madrid.

Los Blanco’s midfield general took at the Barcelona captain, stating he does not have the ‘balls’ to join their bitter rivals.

“I do not think he will come to Real Madrid if I have to rule it out categorically,” Kroos said on the Einfach mal Luppen podcast with his brother Felix.

“To stay in Spain: you need cojones for that. I think hardly anyone in the football world can imagine Barcelona without Messi.”

Kroos added “that it could most likely be Pep and City” for Messi, but he also pointed out the benefit Madrid would gain from Barcelona losing their superstar captain.

“If one of those players no longer plays in the rival team, one can imagine that we do not consider it as something necessarily bad,” the Germany international said.

“Messi away from Barcelona means that Barcelona lacks a total weapon.”

With the rumour mill still grinding, it has been reported that Pep Guardiola would reunite with the Argentine international.

The deal however is subject to them meeting his release clause of £623m.

The Barcelona captain however believes he would be allowed to leave the club on a free transfer. His father is also in the Spanish city to negotiate the move away from the Catalan giants this summer.