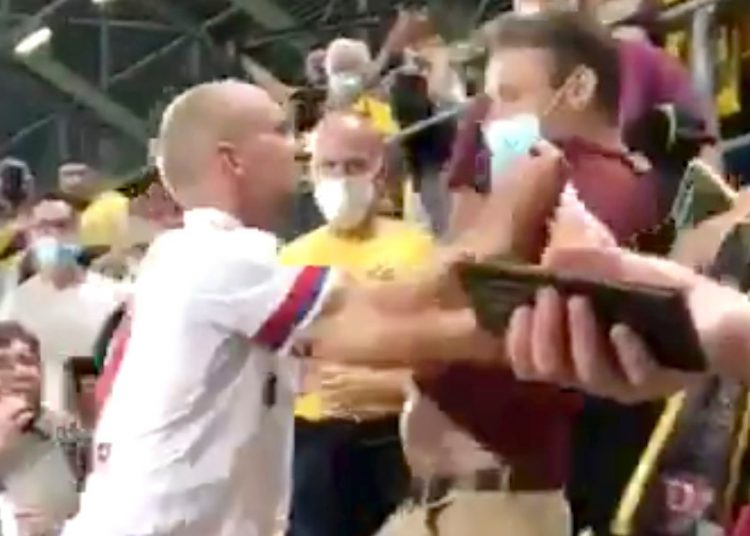 Hamburg’s Toni Leistner triggered the Eric Cantona in him as he jumped into the stands to confront a fan after his team lost on Monday night.

Dynamo Dresden defeated Hamburg 4-1 in the German DFB Pokal in front of a crowd of 10,053 spectators – the largest in Germany since the lockdown started in March.

However, a perfect night turned on its head as Leistner climbed into the stands to attack an opposing football fan.

The Germany international halted an interview and then headed straight to the fan who was apparently abusing him during the course of the match.

As he got there, the grabbed the Dresden fan by the scruff of the neck, and then shoved him to the floor.

Fans around the duo broke up the fight before security persons brought the player back to the field and subsequently to the dressing room.

Leistner, who used to play for Dresden, has since apologized on social media as he revealed that he was provoked by the home end.

“After the match in my hometown, I was verbally abused from the stands,” he wrote on Instagram.

“I can usually cope with it. But this was extremely and massively below the belt, against my family, my wife, and my daughter.

“That’s when I lost it, even more so because it was already an extremely emotional match for me.”

He added: “Regardless, this should have never happened to me. I am a father who wants to serve as a role model.

“I apologize in all forms and can only promise that – no matter what insults are thrown my way – this will never happen again.”

After their 4-1 loss, Hamburg defender Toni Leistner stopped his post match interview and confronted an opposing fan in the stand.