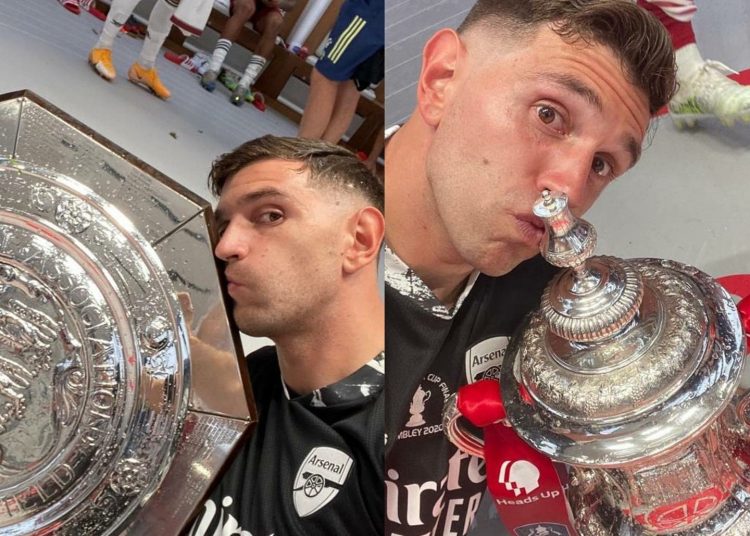 Argentine goalkeeper, Emiliano Martinez completed his summer switch from Arsenal to Aston Villa in a transfer deal worth £16m that could rise to £20m with add-ons.

We wish you all the best with @AVFCOfficial 👊

The 28-year-old signed for the Gunners 10 years ago in August from Independiente and has gone on to make a good name for himself.

Before leaving the club, he started the last 11 matches of the 2019/20 season, performing superbly and continuing this form into this season for the Community Shield penalty shoot-out victory over Liverpool.

Fans of Arsenal took to social media to express their feelings after the club confirmed his departure.

Can’t forget what a brilliant save. Tq EMI 💪👏🏻🔥✌️ pic.twitter.com/9WBrj7GH0n

Thank you for everything Emi. One a gunner, always a gunner ❤ pic.twitter.com/wAkwTE7dSs

Arrives at the club as a youngster, leaves as a winner. Thanks a lot for your contributions, Emi. Good luck for your future. pic.twitter.com/elrtB2CS9f

Thanks Emi for the FA cup and still won more trophies than Tottenham in the last decade ❤️ pic.twitter.com/AsNWUEZ9rr

Farewell @emimartinezz1. Fantastic goalie and all round lovely guy 👍😢 pic.twitter.com/JTWZ2Xl1Zy

Nothing but love and respect for you Emi ❤️ It hurts to see you go. Wish you all the best mate ✌️ you’ll forever stay in our hearts as a gunner ❤️ pic.twitter.com/JyUUUKp8yF