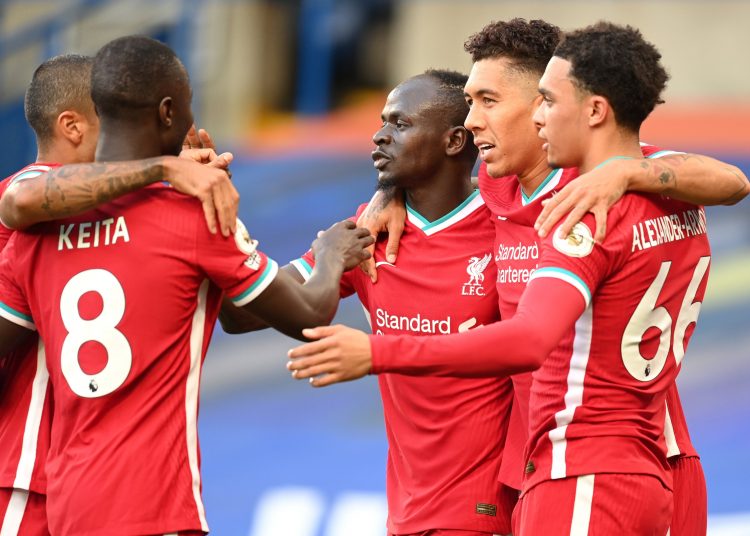 Kepa Arrizabalaga made headlines for all the wrong reasons once again as Liverpool won 2-0 at Chelsea on Sunday.

The Blues’ goalkeeper played a part in Andreas Christensen’s first-half red card and assisted Sadio Mane’s second goal as the champions were dominant at Stamford Bridge.

The two sides slugged out an engaging but goalless first half, but the Blues ended the opening period reduced to 10 men.

Christensen was sent off for little more than a rugby tackle on Mane when the Liverpool forward was clear in on goal.

Mane beat both Christensen and Kepa Arrizabalaga to Jordan Henderson’s rangy pass, and was initially awarded a yellow card by referee Paul Tierney.

After a VAR check a red card was awarded, and with precious little protest from Chelsea.

Frank Lampard sacrificed Havertz at half-time, with Tomori pitched into action to replace Christensen in defence.

Liverpool handed a debut to new man Thiago, with the Spain midfielder replacing captain Jordan Henderson at the break.

Mane headed in Roberto Firmino’s cross, after the Brazil forward had exchanged passes with Mohamed Salah in the Chelsea area, to put the visitors 1-0 ahead.

The Blues had all 10 men behind the ball but to no avail, as Klopp’s Reds seized control.

Mane doubled his tally within minutes, capitalising on a horror show from Chelsea keeper Kepa.

The Spaniard delayed his clearance and played the ball into Mane’s path, and the Senegal international tapped home to make it 2-0 to Liverpool.

Timo Werner forced a penalty, cutting in off the left and drawing a heel clip from Thiago.

Jorginho stepped up and delivered his usual skip-step routine – but Alisson thwarted the Italy midfielder with a fine save, putting an end to his 100 percent record from the spot for Chelsea.