‘Kwame Dada’: Has this Ghanaian produced the worst penalty ever in football? [VIDEO] 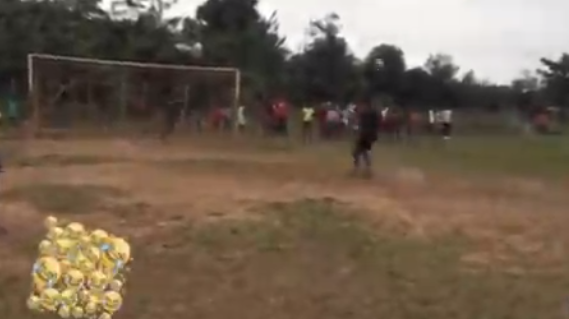 Missing a penalty is normal in the modern game: As a matter of fact, big-name players have all missed crucial penalties when they needed to have converted.

Roberto Baggio, Asamoah Gyan, Ronaldinho, Cristiano Ronaldo and Lionel Messi, among many others, have crumbled under pressure and missed from 12 yards.

However, none of them was as bad as this.

A Ghanaian colts footballer has produced what could be the worst penalty miss of all time in a viral video on Twitter.

The player was only referred to as Kwame Dada in the video, and his team’s name is unknown but what is known is how awful the penalty kick was.

In what seemed to be the last kick of the game, “Kwame Dada” stepped up to take a penalty.

After placing the ball on the spot, he ran from a spot off-camera and awkwardly miscued the shot with his right foot – one could believe that he was trying to catch bushmeat from the shrubs near the football field.

It is not only the miss that is iconic but the hype the player received before and after the miss.

After missing, he was embraced by his colleagues in a mocking manner as he found himself a spot on the floor among his teammates and then burst into laughter.

Hats off to you ‘Kwame Dada’, you will forever be remembered for this.