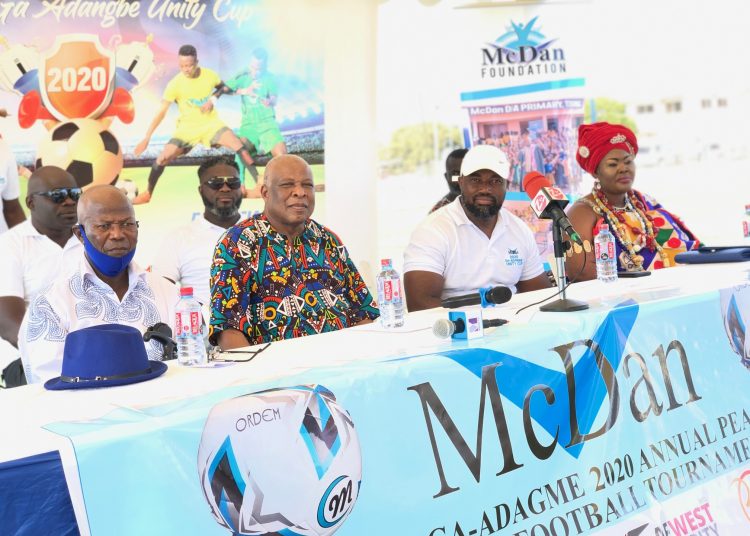 The winner of this year’s McDan Ga-Adangme Annual Peace and Unity Cup Football Competition will walk away with a prize money of $2000, organizers of the event, McDan Foundation have announced.

The annual competition, aimed at promoting peace and unity among the Ga-Adangme communities across Greater Accra, will kick off on Monday November 2 with Former winners La Town XI engaging Sege in the first game at the McDan La Town Park in Accra.

Addressing the launch at the McDan Park, which was well-patronized by former players including the likes of Dan Quaye, Godwin Attram and George Alhassan, the Chairman of the McDan Group of Companies, Mr Daniel McKorley said this year’s event aside fostering healthy competition is meant to calm tensions ahead of the 2020 Presidential and Parliamentary elections.

He said: “The McDan Unity Cup is a tournament I’m very passionate about because it will be a celebration of everything that makes our country great: our diverse culture and how football allows us to embrace diversity and promotes a culture of peace, equality and understanding.

“What we see in our country – all our key towns – is the need to come together and unite for peace, especially ahead of the general elections. And this tournament provides a great opportunity to showcase the power of unity and to celebrate football as a connector of people, ideas and differences”.

The runners up in the competition are also expected to walk away with a cash prize of $1000 with each team getting a financial support of Ghs 500 per match day as traveling allowances. Each team was also presented with two sets of jerseys, football, sets of hoses, as well as T-shirts.

Per the draw of the knockout competition, Teshie will lock horns with Dodowa and Osu will face Dome Kwabenya on November 4, 2020, while Gamashie will play Chorkor/Mamprobi on November 6, 2020.

On November 7, 2020, losing finalists in 2017 Tema will engage East Legon and Ada will battle Dansoman.

The opening round of games will be concluded on November 8, 2020, when Prampram face Kpone and Nungua play Adenta.

All the games will be played at the McDan La Town Park with the final expected to come off on December 4.