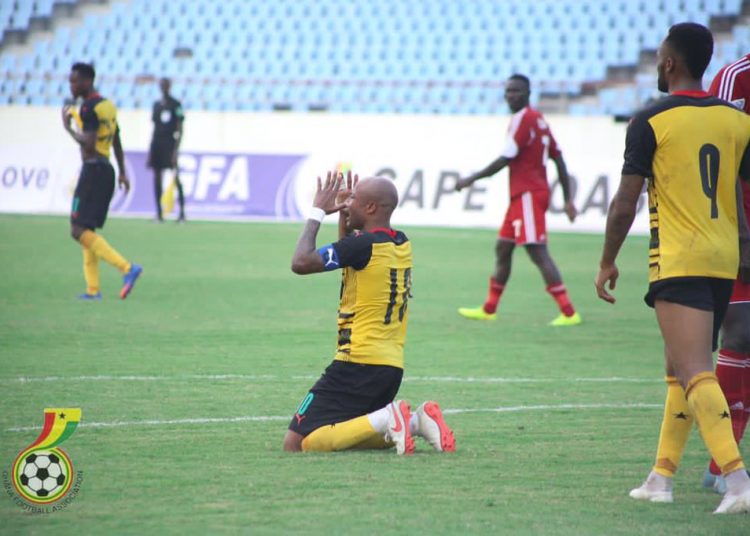 Ayew scored a great first half free-kick and settled any nerves with a great solo goal with nine minutes to play.

The win takes the Stars to nine points, three clear of their opponents and South Africa, who face Sao Tome on Friday.

Following some controversy over his picks for the 23-man squad and a number of key withdrawals, a lot of people wondered whether the players Akonnor put his faith in would step up to the plate.

So how did they perform against Sudan?

Aside from a few jittery moments in the first half, Richard Ofori was largely untroubled by the Sudanese frontline. One shot hit the side-netting in the first half, while another, more worrying effort flashed past the post in the second. Ofori’s net, however, did not rustle as he kept his third straight clean-sheet of the qualifiers.

A decent outing for new boy Nettey, although at times in the first half, he seemed a little bit too eager to impress.

Not great but not poor either. It was a stable return to national team action for Chelsea left-back. Was a bit hesitant going forward in the first half but grew in confidence in the second, providing some timely support.

Having been moved into central defence for the friendly against Qatar, Djiku was retained in the middle of Ghana’s backline in Cape Coast. Largely solid throughout the match and dealt with most of what was thrown at him.

Not the sturdiest afternoon for John Boye in defence for the Black Stars. Struggled when the Sudanese attackers run directly at him, particularly in the first half. Was beaten easily for a shot that hit the side-netting and was probably lucky not to should have conceded a penalty for a silly tackle in the box.

Had an average first half with a few stray passes and failed to provide enough cover for the defence. Was yellow-carded early in the second half but was more composed as the game went on.

Lomotey’s selection by C.K Akonnor was one of the most debated issues prior to the game and it seemed justified as he gave the ball away a few time with stray passes. However, a much-improved second half did him a lot of good. He was calm, covered ground really well and made some pretty decent passes as well. One of Ghana’s best players in the second half.

A really impressive first half was followed by a pretty uneventful second for Tariq Fosu. His runs in the first period cause the Sudanese defence a lot of problems and they struggled to deal with his pace. He should have ended with an assist but his run and pass to Samuel Owusu in the first half wasn’t finished by the winger.

A very flashy player, clearly with the pace and skill to trouble any defender but his final product constantly let him down on Thursday. His jinking runs often ended with him losing the ball and he probably should have scored when put through by Tariq Fosu.

A virtuoso performance from the captain. His two fantastic goals will steal all the headlines (and rightly so, they were that good) but it was his work rate that caught the eye. He was constantly on the move putting pressure on the Sudanese players and often winning the ball back for the Black Stars. Was a constant threat, putting at least two dangerous balls into the Sudan box. And those goals…right? Might have had a hat-trick if the referee had not blown for a foul in the first half.

No goal for Jordan Ayew today but a great showing as the Black Stars’ lone forward at times. Was constantly threatening the Sudanese backline, often dropping back to start attacks and get things moving. His free-kicks into the box weren’t too bad either. Should have done better when played in by Caleb Ekuban.

A decent cameo by Caleb Ekuban after replacing Samuel Owusu in the second half.  Ekuban managed to play one of the passes of the game to Jordan Ayew who couldn’t make much of it. He was, in turn, played in by Jordan but was tackled in the box before he pulled the trigger.

Opoku came on for Emmanuel Nettey in the second half to shore up a right side that was getting increasingly overrun by the Sudanese. Helped deal with the growing threat from Sudan.