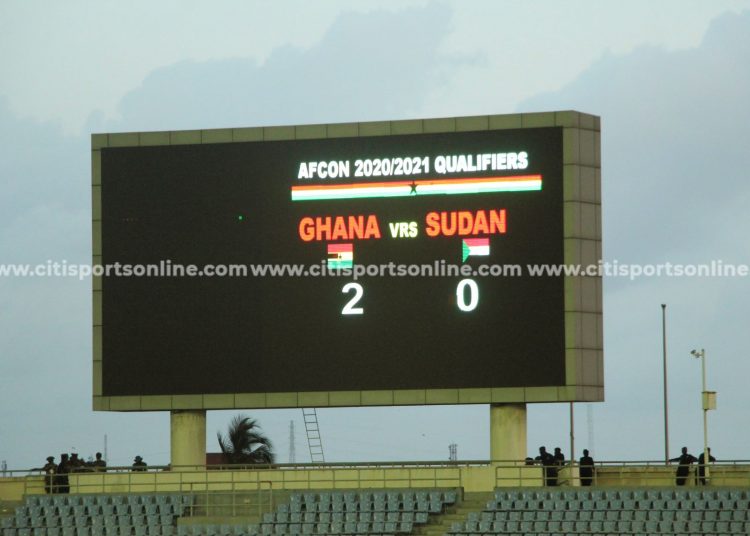 Ghana’s Black Stars picked up a very handy 2-0 win over Sudan in their AFCON 2021 qualifier on Thursday.

Andre Ayew’s brilliant brace buried a bland Sudanese side that didn’t offer much in the way of a threat at the Cape Coast stadium.

From coach C.K Akonnor’s selections and the Black Stars captain’s amazing strikes, either side of the halftime break, yesterday’s match has been picked apart on Ghanaian television and radio, as well as social media.

However, not every moment was captured by the TV cameras and might have been missed were it not for the trusty lenses of Citi Sports‘ Yaw Antwi Owusu.

Just hours before the Black Stars took to the field against Sudan, the demise of Ghana’s former President, Jerry John Rawlings was confirmed. 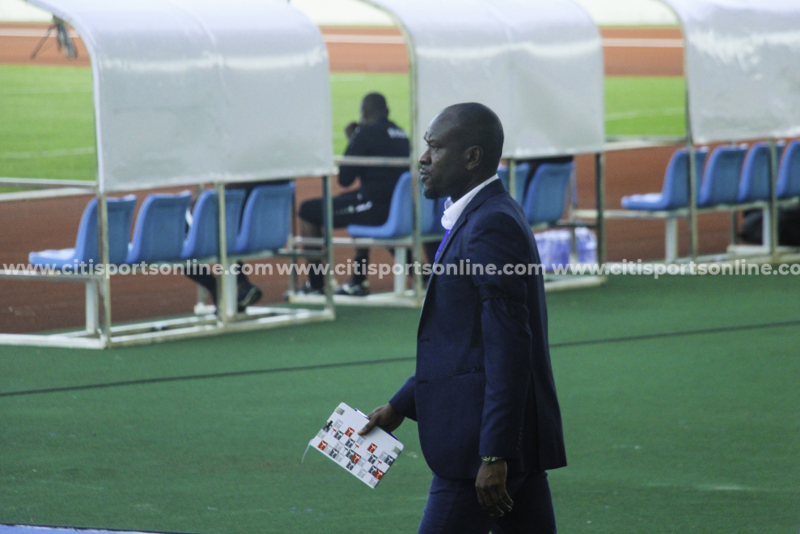 The two teams observed a minute of silence before the start of the game while the Black Stars players and technical team wore black strips of cloth around their arms in honour of the first Head of State of Ghana’s Fourth Republic. 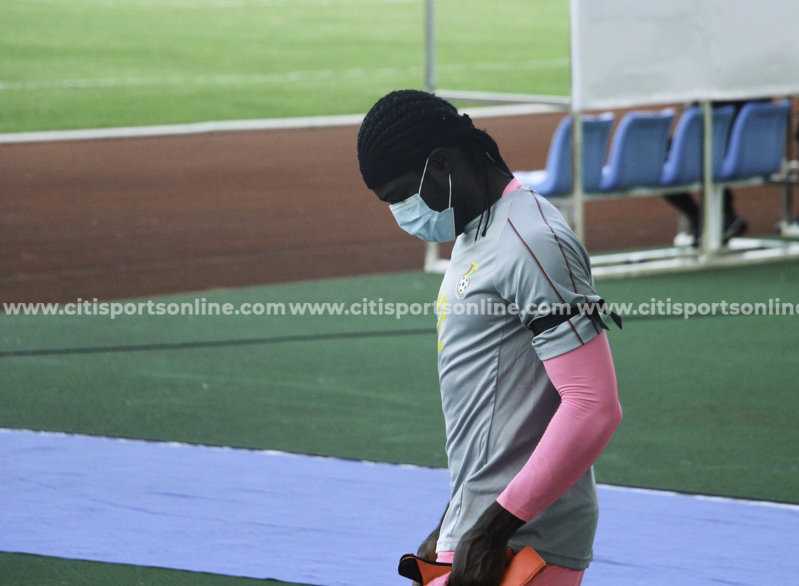 After the match, Ghana’s two-goal hero dedicated the win to the memory of “Papa J” as he was fondly known.

The Sudanese were pretty aggrieved when the referee waved away their claims for what they felt was a nailed-on penalty.

Sudan’s head coach, Hubert Velud. was constantly in the ear of the assistant referee, who got fed up and shoved him to the ground. 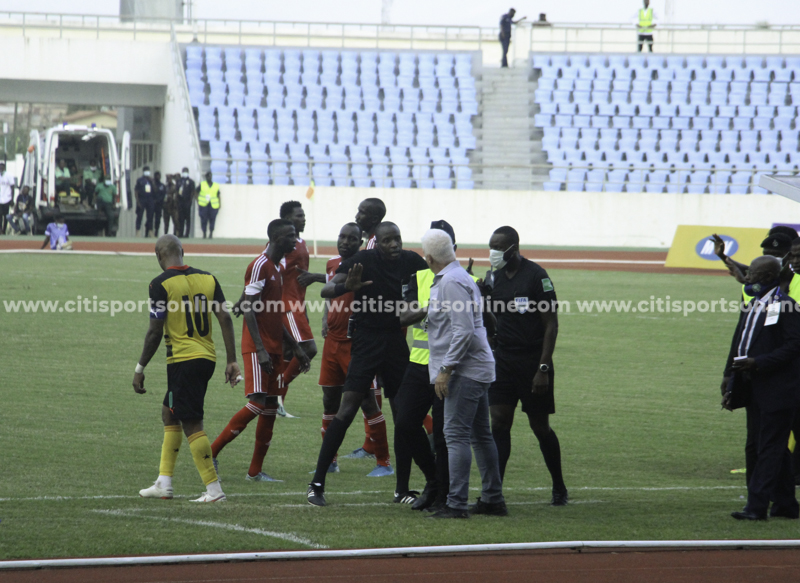 This sparked a melee on the touchline which delayed the match for a number of minutes. 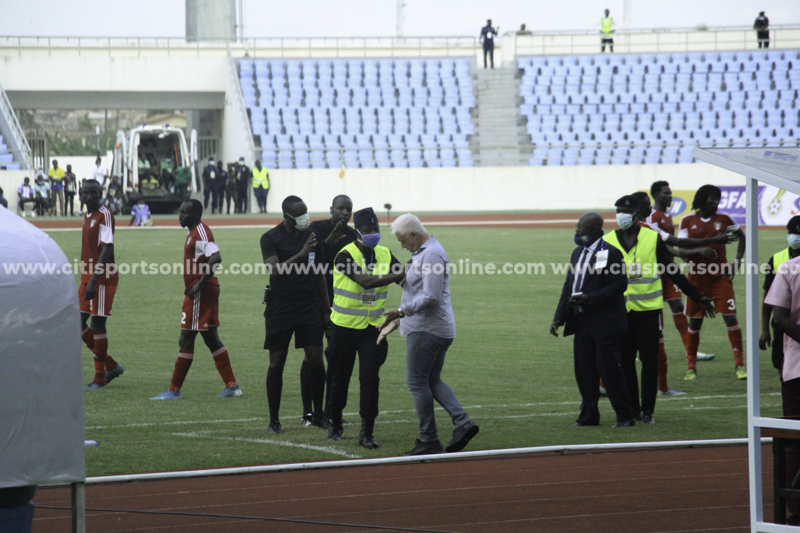 The coach and linesman had to be separated by a hoard of officials and players. Eventually, the referee booked Velud for his complaints. 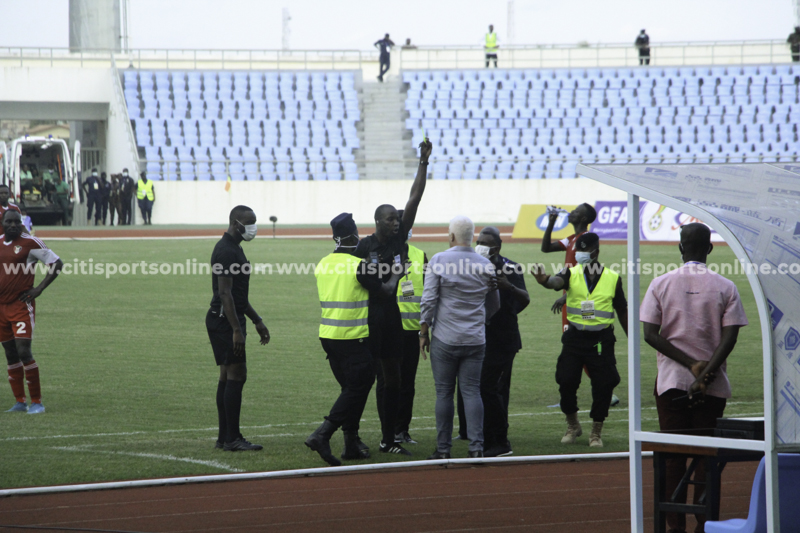 ‘We’ll watch no matter what’

Prior to yesterday’s match, CAF issued a statement calling for all the AFCON qualifiers to be played behind closed doors, as part of measures to prevent the spread of COVID-19. 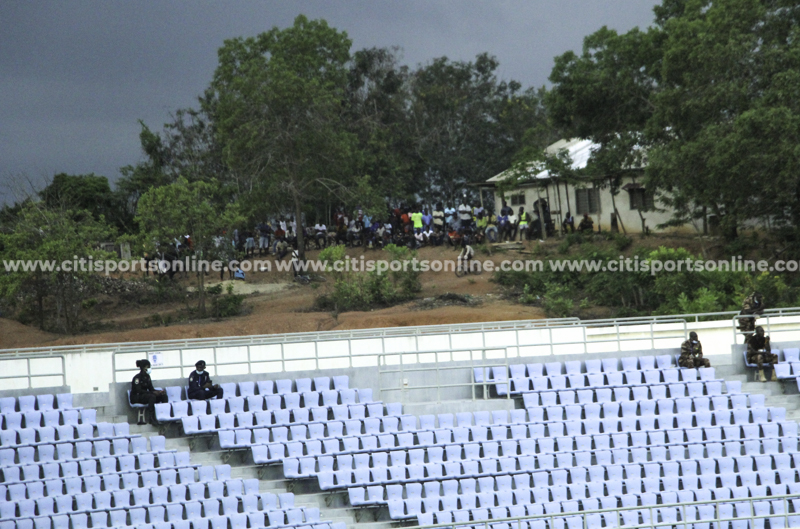 The NSA complied, meaning fans were required to stay away from the stadium and watch the match at home.

Some football fans weren’t content with that and made their way to the stadium, standing as close to the ground as they could without catching the attention of the security officials stationed at the edges of the stadium to catch the match “live.” 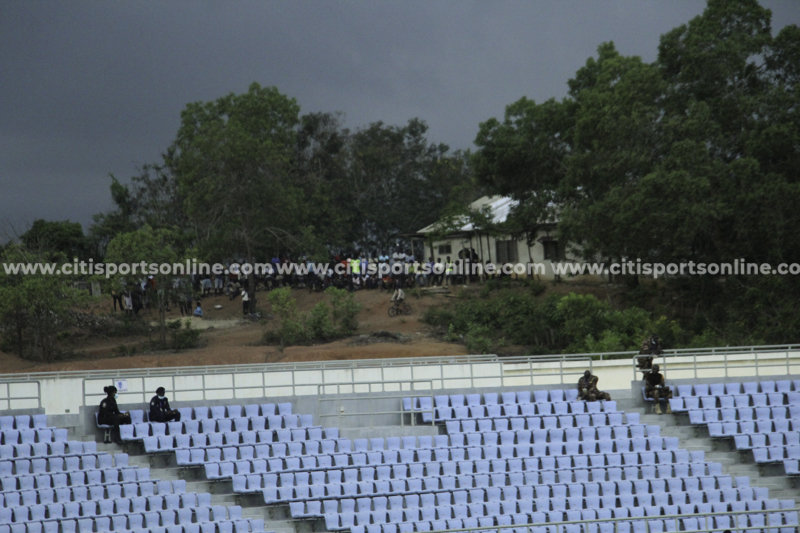 Andre Ayew bagged a brace against Sudan but he may well have had a hat-trick had the referee not been quick to blow on his whistle.

With the Black Stars 1-0 up right at the end of the first half, Ayew headed home a Samuel Owusu cross and turned to celebrate when the referee’s whistle blew. 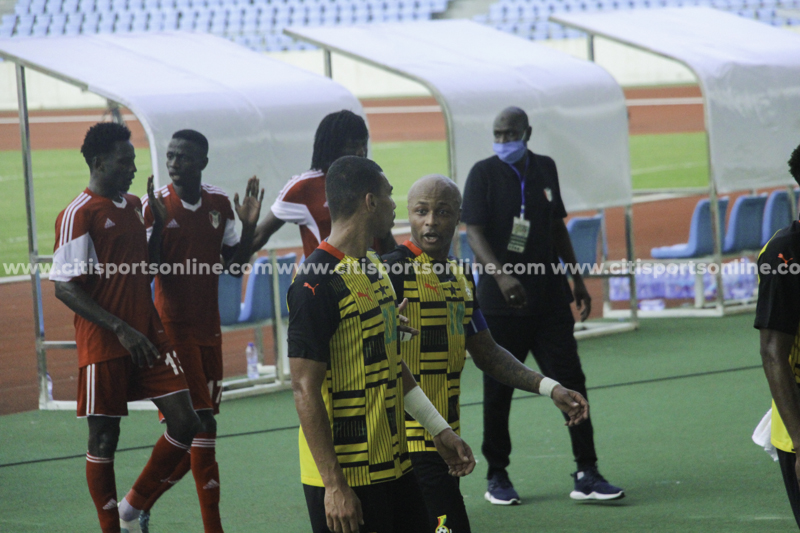 A collision had sent a Sudanese defender to the ground with the ref assuming that Andre was involved. However, replays showed Andre Ayew did no wrong and the goal should have stood. 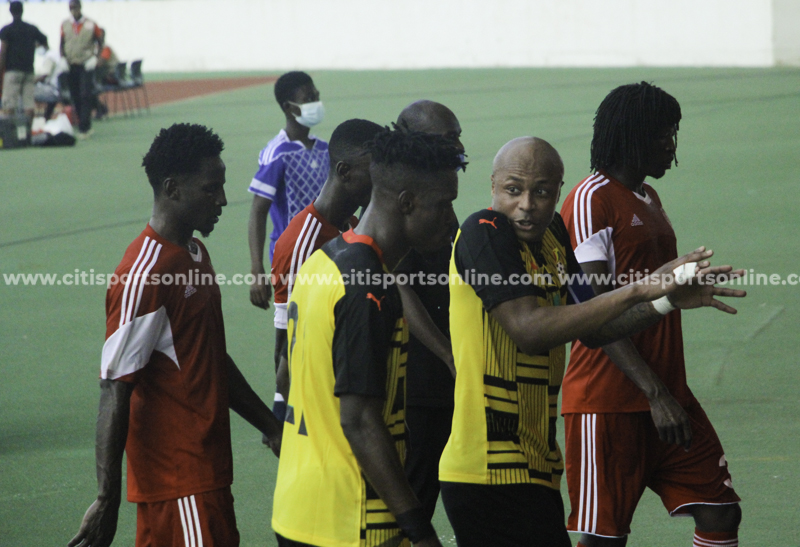 Peeved by the referee’s decision, the Black Stars captain could be seen complaining to anyone who’d listen as the teams walked off. Ayew had the last laugh eventually as he scored a fantastic solo goal late on.

Waiting in vain for their chance

Ghana’s two sub goalkeepers, Lawrence Ati Zigi and Razak Abalora had their turns in goal in the Black Stars’ friendly matches against Mali and Qatar. 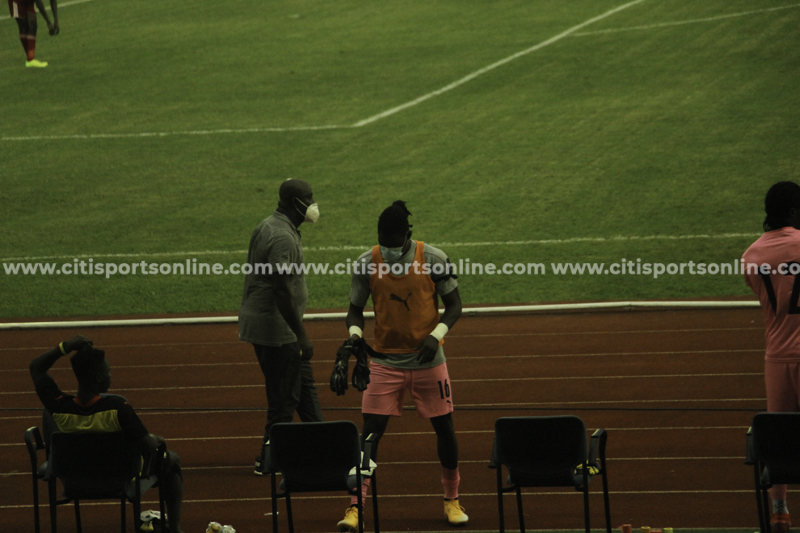 They, however, had to settle for a place on the bench with Richard Ofori returning to the starting lineup.

When Ofori found himself requiring treatment after a collision, the two keepers could be seen keenly observing the proceedings, hoping they’d be given a chance. 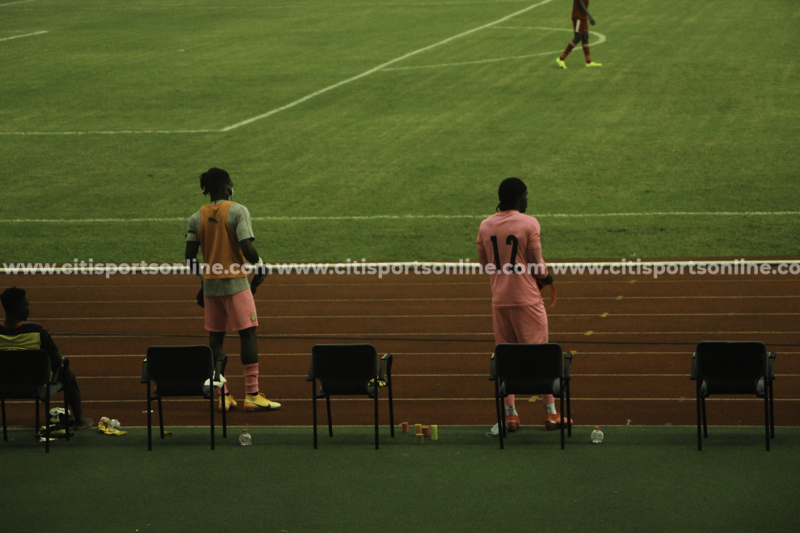 Ofori was back up moments later and completed the game leaving the two eager showstoppers disappointed.

Coaching in the rain

The rains came down on Thursday in the second half of the Stars’ win. Choosing not to seek shelter in the dugout, head coach CK Akonnor braved the conditions barking out instructions to his players.

He was thoroughly soaked as he directed his charges though the latter stages of the game desperate to secure his first competitive win in charge of the national team.