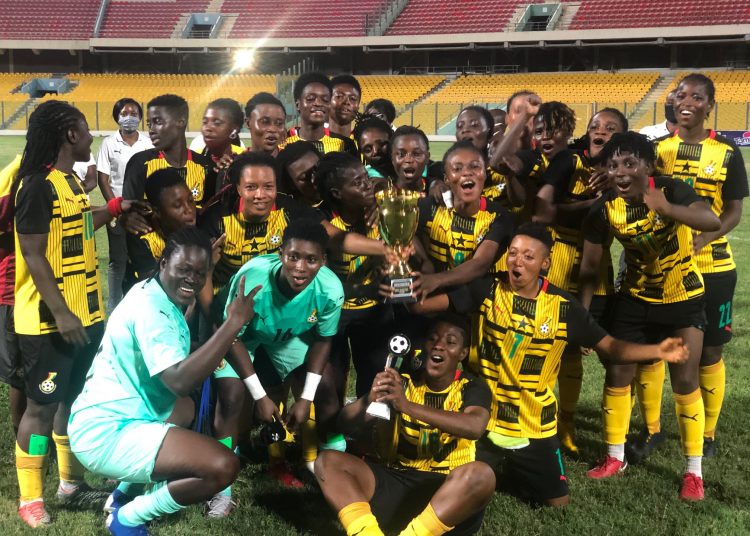 Ghana’s Black Queens on Monday, handed the Atlas Lionesses of Morocco their second defeat on the spin with a brace from Sandra Owusu Ansah giving Mercy Tagoe-Quarcoo’s team a 2-0 win in an international friendly at the Accra Sports Stadium.

The Ghana forward scored two goals on the evening to give Ghana a two-nil win. She put Ghana in front in the 10th minute flummoxing goalkeeper, Errnichi Khadija who had earlier made some jaw-dropping saves.

Priscilla Okyere volleyed over in the 14th minute and Sandra Owusu Ansah audaciously finished it off to net her second and sparked celebrations at the Accra Sports Stadium.

The Moroccans then, took over the game, dominated possession in the latter part of the first half but had nothing to show for it as the first half came to a close.

Back from recess, the second half saw both teams pressing hard with Ghana captain, Elizabeth Addo coming close in the 68th and 76th minutes but her efforts got cleared off the goal line by goalkeeper, Errnichi Khadija. The Black Queens dominated the latter stages of the game but could not find the back of the net as the Moroccans resorted to a defensive system to avoid an embarrassing score line.

The two teams changed their pattern of play to conserve energy with the game ending two nil in favour of Ghana. The Black Queens thus won 5-1 on aggregate following a come from behind 3-1 win in the reverse tie on Thursday.

The best player of the match award was presented to Ghana midfielder Juliet Acheampong.  The hardworking midfielder took home a trophy for her scintillating display. Early on, the U-20 side, Black Princesses defeated their counterparts 4-0 to take a 4-1 aggregate win having lost the reverse tie 1-0 on Thursday. The Moroccan senior team won the fair play award, the Black Princesses were adjudged the best team and the Black Queens were the overall winners for putting up splendid performances in both games.

The friendly games forms part of the two teams’ preparations towards their respective assignments in 2021. The Black Princesses will compete in qualifiers for the 2021 FIFA U20 World Cup while the Queens fight for a place at the 2022 Africa Women Cup of Nations.