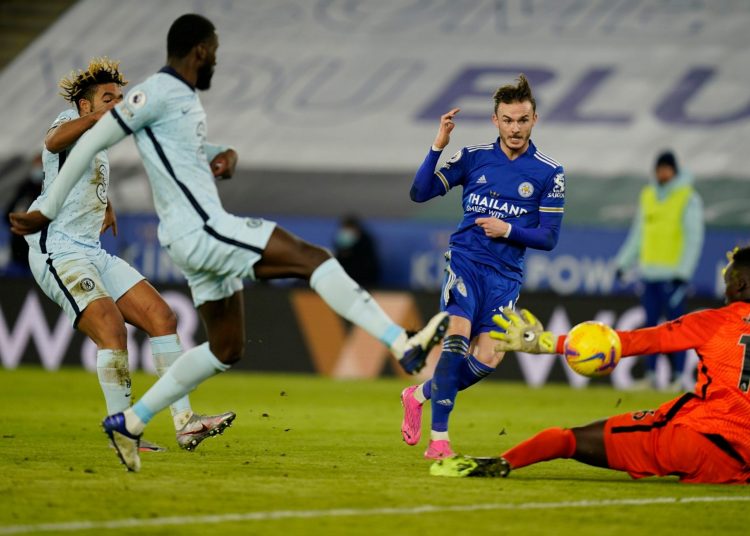 Leicester City midfielder James Maddison says he and his teammates ‘knew’ Chelsea ‘switched off’ at set-pieces ahead of Wednesday night.

For the opening goal, the Blues were caught napping with Leicester taking a short corner before the ball was eventually pulled back to Wilfred Ndidi on the edge of the box.

The shot itself, the Blues could do little about the with the Foxes midfielder scoring with an excellent strike, but the defending up to the point Ndidi received the ball on the edge of the box was nothing short of sloppy.

And that’s something Leicester expected, according to the scorer of the second goal, Maddison, who told Sky Sports: “We worked on it. We looked at Chelsea with little short corners and being creative.

“We [saw] they switch off sometimes from set-pieces and we knew that was something we could pick on.

“We haven’t scored enough goals from set-pieces. I’m pulling my hair out sometimes as the corner taker!

“You look at the stats that come up, it says ‘goals scored from set-pieces, Leicester City bottom of the table’, so it’s really nice to see one come off. A bit of a relief, actually!”

The defeat leaves Lampard under intense pressure following a run of just two wins in eight Premier League games, causing the Blues to slide down the table.

If they haven’t already, Chelsea are beginning to fall completely out of the title race despite only being at the halfway stage and that could leave owner Roman Abramovich with a decision to make after spending more than £200million to revamp the squad in the summer.