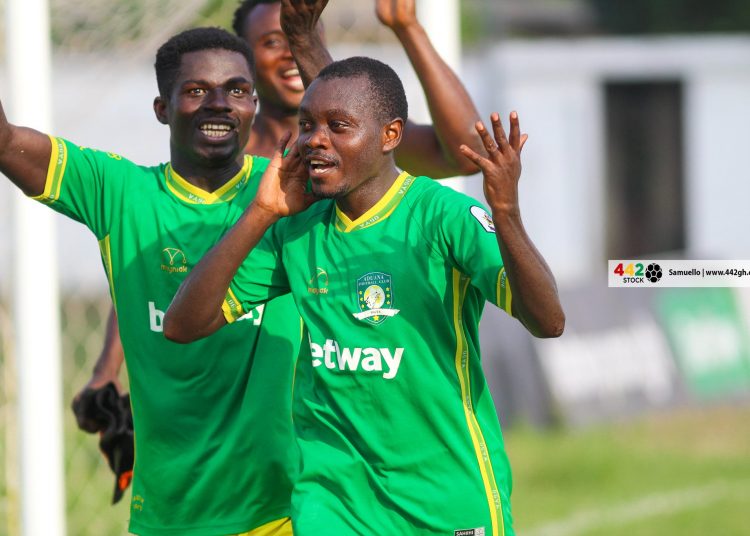 Kumasi Asante Kotoko missed the chance to go top of the Ghana Premier League table after succumbing to a 1-0 defeat to rivals Aduana Stars at the Accra Sports Stadium on Sunday night.

Samuel Bioh’s 75th minute goal was enough to hand the Dormaa-based side a rare away win against Kotoko, displacing their rivals to move second on the league log.

With just two points behind top of the table Karela, Kotoko went into the game with an opportunity to claim top spot, for the first time this season and they made their intentions known early.

Kotoko felt they should have been awarded a penalty early on in the game when Aduana goalkeeper Joseph Addo came off his line to hack down striker Kwame Opoku as he attempted to skip away from him but the referee waved play on, much to the dismay of the Kotoko supporters in the stadium.

Kotoko continued to dominate for much of the first half, but clear chances were far and few as Aduana remained resolute in the defense and the first half ended goalless.

In the second half, Kotoko continued from where they left off, dominating play without creating great chances. Fabio Gama saw a feeble header saved before his replacement Naby Keita fired wide from 20 yards.

On 75 minutes, Aduana delivered the sucker punch in a rare incursion into the Kotoko area.

The Kotoko defense failed to clear a cross from the left hand side and Bioh pounced on the loose ball to fire home an unstoppable strike from inside the box.

Kotoko were dazed and were never able to recover from then on as Aduana held on for the victory which has now sent them second on the league log.

Kotoko meanwhile slip down to 5th, albeit with the same number of points as Aduana.

It is a first loss for Kotoko in the league in 5 games and the first time Aduana have beaten Asante Kotoko away from home since they got promoted to the Ghana Premier League in 2009.

HIGHLIGHTS: Watch the goal that sunk Asante Kotoko in Accra

HIGHLIGHTS: Watch the goal that sunk Asante Kotoko in Accra