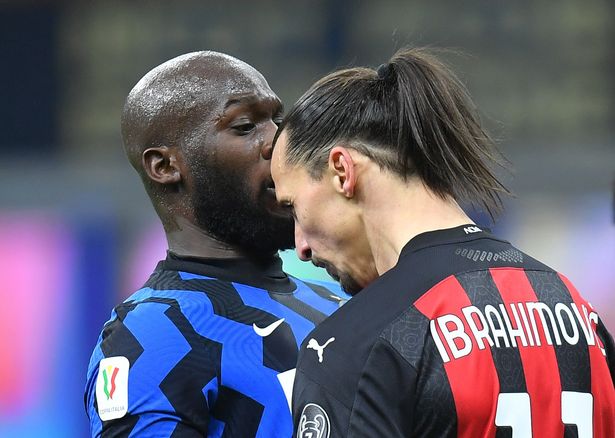 Zlatan Ibrahimovic has denied using racist language in his clash with Romelu Lukaku in the Milan derby on Tuesday night.

AC Milan forward Ibrahimovic and Inter striker Lukaku were involved in a number of incidents on the pitch – before Ibrahimovic was eventually sent off.

Inter won the match 2-1 thanks to a late goal from Christian Eriksen.

“In Zlatan’s world there is no place for racism,” the Swede tweeted.

However he then added an apparent dig at his former Manchester United teammate by adding: “We are all the same race – we are all equal !! We are all players some better then others.”

Ibrahimovic, 39, put AC Milan in front in the 31st minute but he was then booked for his part in a head-to-head clash with Lukaku, who had to be pulled away as he tried to confront the Swede when the players left the field at half-time.

It was one of several clashes between the players.

Pitchside microphones picked up Ibrahimovic saying “go do your voodoo” to Lukaku. That was an apparent reference to claims made in 2018 by Everton owner Farhad Moshiri that the Belgium striker opted to leave the club after receiving a “voodoo message”. Those claims led Lukaku to seek legal advice.

Lukaku, 27, was caught on camera swearing at Ibrahimovic including lude references to Ibrahimovic’s wife and mother.

Ibrahimovic was then dismissed 13 minutes into the second half for a foul on former Manchester City defender Aleksandar Kolarov.

Lukaku got the equaliser from the spot before the late winner from Eriksen.

In 2019, Ibrahimovic gave an interview to Italian newspaper Gazzetta dello Sport in which he said he had once offered Lukaku £50 for every time he had a good first touch.

There have been no official comments from either club about the clashes. It is understood that Ibrahimovic addressed his team-mates in the dressing room after the match to insist there were no racist intentions to any of his words with Lukaku.

The matter was being discussed by the Italian Football Federation on Wednesday and an update is expected on Friday.