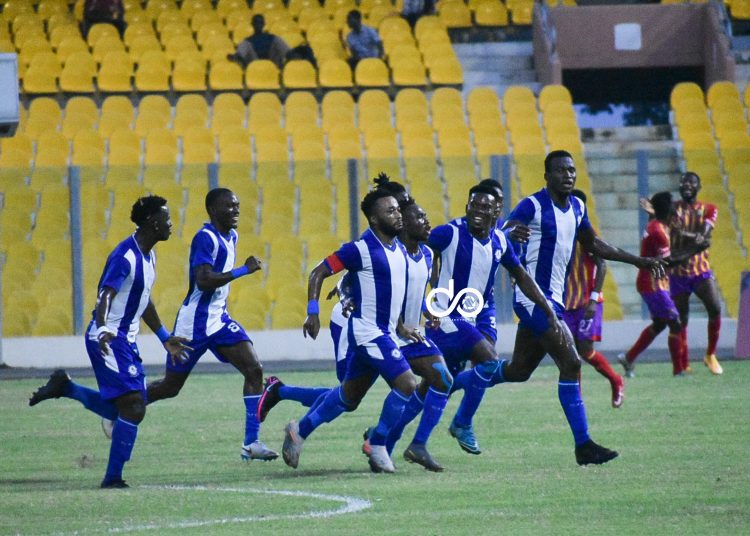 Five second half goals from WAFA inflicted a 5-0 defeat on Liberty Professionals on Matchday 11 of the Ghana Premier League in Sogakope on Sunday afternoon.

The first half ended goalless as both sides failed to find the back of the net.

In the 51st minute, Konadu Yiadom scored the opening goal for the home side.

There was no stopping WAFA as Marvin Owusu doubled their lead in the 67th minute before Sampson Agyapong added the third just two minutes after.

Augustine Boakye put the game beyond the reach of the visitors after he scored the 4th goal for WAFA in the 75th minute.

Konadu Yiadom headed in the 5th goal to seal the deal for WAFA, before Liberty were reduced to ten men after Paul Kwame was shown a red card.

The Ashanti Derby between AshantiGold and Kumasi Asante Kotoko ended in a goalless stalemate at the Obuasi Len Clay Stadium on Sunday.

The home side were lucky not to have conceded as most of the scoring opportunities fell the way of Kotoko who failed to take advantage of any of them.

AshGold goalkeeper, Bailou had to come out with a top save to deny Kwame Opoku in a one-on-one situation in the 7th minute.

The Porcupine Warriors kept pushing for the opener as Naby Keita came so close in the 84th minute but his effort missed the goalpost by a few inches.

Fabio Gama’s header late in the game went wide as Kotoko failed to find the back of the net.

The draw means AshantiGold remain undefeated at home this campaign while Kotoko preserve their unbeaten away record.

Karela United maintained their place at the summit of the Ghana Premier League log with a 2-0 win over Medeama at the Crosby Awah Park on Sunday.

Taylor Diawise scored his ninth goal of the campaign to put the hosts ahead in the second half. (61st minute).

Kwame Boateng scored in the 73rd minute to put the game beyond the reach of Medeama.

The win keeps Karela at the top after eleven games with 21 points.

Legon Cities FC moved out of the relegation zone after they recorded a 1-0 win over Inter Allies on Match day 11 in the Ghana Premier League on Sunday at the Accra Sports Stadium.

Youngster Matthew Cudjoe put the visitors in the lead in the 12th minute after an attempt by the visitors went over the bar.

Inter Allies made several attempts to find the equaliser but could not find the back of the net.

Cudjoe’s goal proved to be the winner as the hosts failed to level the game.

The win leaves Legon Cities in 14th place with 12 points while Inter Allies remain in 18th position with 7 points from 11 games.

Elmina Sharks and Dreams FC played out a 2-2 draw at the Ndoum Park on Sunday.

The visitors took the lead just five minutes into the game through Agyenim Boateng who pounced on a ball from Joseph Esso.

Dennis Mensah leveled for the hosts in the 25th minute with a header from close range.

Elmina Sharks put their noses in front through a penalty which was converted by Benjamin Tweneboah.

Suleimana Fahadu then produced a belter out of nowhere to level for Dreams FC in the 66 minute.

Agyenim Boateng thought he had given Dreams the lead after tapping in from close range only for the referee to whistle for offside.

The result means Dreams FC are unbeaten in five games since the arrival of Serbian trained Vladislav Viric.

Aduana Stars dropped to fifth on the Ghana Premier League table after being held to a 2-2 draw by Ebusua Dwarfs in Dormaa on Sunday.

The hosts came into the game with so much confidence following their 1-0 win over Kotoko in matchday 10 but they fell behind after 30 minutes after defender Isaac Kwain put the ball in his own net.

That lead will only last for 15 minutes as the hosts leveled just before the end of the first half through Yahaya Mohammed’s penalty.

Sam Adams put Aduana in the lead for the first time in the 75th minute but Dwarfs against the run of play grabbed the equaliser through Moro Sumaila in the 81st minute.

Accra Great Olympics claimed the bragging rights in the Ga Manste Derby as they beat Hearts of Oak 2-0.

Despite the Phobians controlling the first 10 minutes of the game, it was Gladson Awako who grabbed the first goal of the game – scoring an incredible free kick in the 14th minute.

The Oly Dade boys turned one goal to two, as Maxwell Abbey capitalized on some poor marking by the Hearts of Oak defenders.

The win gives Accra Great Olympics their first win over Hearts of Oak since 2004.

Kwame Peprah scored a hat-trick as King Faisal came from behind to secure a 4-3 victory over Berekum Chelsea on Matchday 11 of the Ghana Premier League at the Ohene Ameyaw Park in Techiman on Saturday.

Chelsea raced to a 3-0 lead in the first half and appeared to be comfortably cruising to victory before King Faisal staged one of the greatest comebacks in the Ghana Premier League with 3 second half goals of their own to turn the tie around.

Bechem United recorded their first win of 2021 with a resounding 3-1 victory over Techiman Eleven Wonders in Match Week 11 on Friday afternoon at the Nana Gyeabour Park in Bechem.

Samuel Boakye’s first goal of the season in the 17th minute put Eleven Wonders into a first half lead.

With 15 minutes to go, the hosts found the equaliser through a penalty converted by Emmanuel Owusu Boakye and they went 2-1 up in the 83rd with a goal from Hafiz Wontah Konkoni. Listowel Amankona sealed the deal for the home side in the 90th minute.